If you're a Google One subscriber, you already have access to plenty of perks, such as more storage, 24/7 expert support, and enhanced Android backups. Following today's Made by Google event, we've now learned that some subscribers who pay for the 200GB plan and greater can redeem up to a 10% credit when pre-ordering any of the devices shown off today, available only through the Google Store. 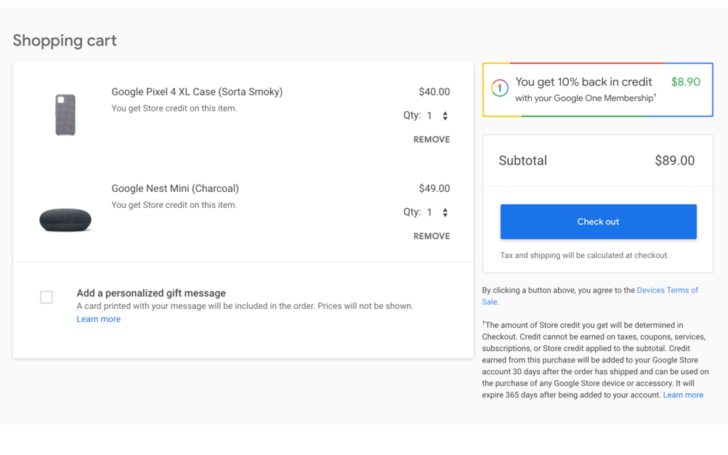 According to Google, online store credit up to $150 per transaction ($250-per-year cap) will be given to Google One subscribers when purchasing any of the new Made by Google products unveiled at today's event, including the Pixel 4, Pixelbook Go, and more. As a result, the percentage that can be slashed off of pre-orders will vary based on users' Google One storage plans, purchase history, and redeemed credit for the year. So far, we've heard reports from our readers saving only 3% with a 200GB plan and up to 10% on a 2TB or higher plan. In all instances, savings are not immediate; buyers will receive their specified Google Store credit 30 days after their items have shipped.

This offer is only valid to Google One customers on the 200GB plan or greater who live in the United States, Canada, United Kingdom, Germany, or Australia. Google One trial memberships and sub-200GB plans are excluded.

Google has explained the details of this offer. All Google One subscribers on the 200GB plan will receive 3% credit on eligible Google Store purchases – not just on pre-orders – while 2TB plan subscribers and higher will receive 10% credit on the same items.

Those who purchase a Pixel 4 will receive three free months of Google One with 100 GB of cloud storage, expert support, and a new service called Pro Sessions, which will allow Pixel 4 owners to schedule a Hangouts call with a Google expert and receive guided tutorials on how to get the most out of their new phones.

Now that Google One subscribers have had plenty of time to enjoy their new Google gadgets, the 3%-10% credit Google promised is finally starting to make its way into users' Google Store accounts. Keep in mind this is just a credit to be used in the Google Store on additional Google Store purchases; it is not cash that will be refunded to your bank account.

The Google Store credit for Google One subscribers is separate from the $100 promotion Google offered to Pixel 4 buyers at launch. As of this week, owners were still waiting to receive their credit from Google.

Google and Nest go big for this Black Friday sale with discounts on cameras, alarms, locks, ...