The concept of wearable speakers is relatively new and weird, and the benefits are questionable for most people. It's a category of devices that sits somewhere between regular old speakers and headphones. They're supposed to make the sound feel even more immersive as you enjoy your home cinema, while neither disturbing nor blocking out your surroundings. One such product is Sony's SRS-WS1. It's been available overseas for quite some time already, and it's now coming to the US.

As well as the headset itself, you also get two accessories in the box. There's a charging cradle with a micro-USB port (eww) that should fully charge the speaker's battery in about three hours. Then there's a transmitter that connects to your TV or console via an optical connector or one of two 3.5mm ports. It wirelessly transmits audio to up to two speakers using a frequency in the 2.4GHz spectrum, but it's not Bluetooth. The range maxes out at approximately 100 feet (30m), or 30 feet (10m) when two devices are connected to one transmitter.

The headset wraps around your neck like the travel pillows you see many people using on flights and the two speakers are hidden inside a gap underneath each of your ears, firing upwards. Sony touts that it added a vibration motor to the device that should make it sound more immersive and make you feel "as if you were there." 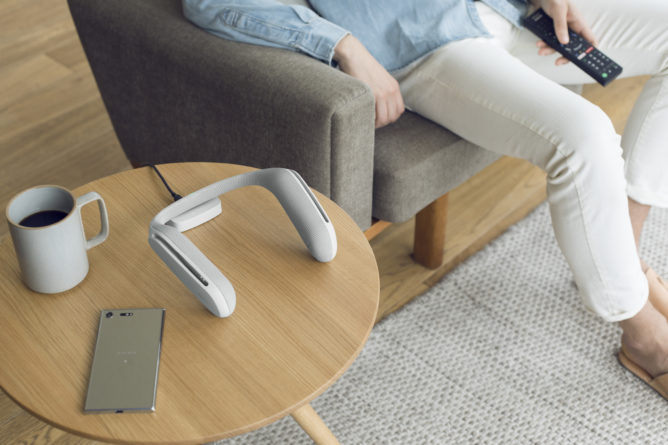 Due to the lack of the ubiquitous Bluetooth standard, you'll need to jump through some unnecessarily complicated hoops to connect the speakers to phones or other portables. The WS1 comes with a micro-USB to 3.5-mm-audio cable that lets you connect devices directly to the headset. That means that if you own a rather recent phone without a headphone jack, you'll need to use another adaptor too. If only Sony's speakers had USB-C, this wouldn't be such a huge issue — most of us probably have a few USB-C to USB-C cables lying around already, but a micro-USB to 3.5-mm-audio cable connector is outright ridiculous. 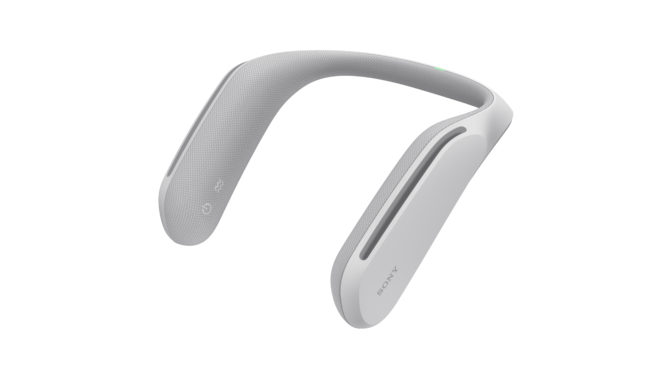 Even if you're just using the speaker to watch TV, it still seems like the WS1 is not solving a real problem. When you're enjoying a show or movie late at night, headphones plugged into a remote such as Roku's would probably suffice, and many TVs and boxes have Bluetooth pairing options these days. If you're looking for a high-fidelity audio experience, there are far more versatile options available in the $300, which is how much a single WS1 headset costs. Or an eye-watering $600 in total if you wanted to add a second headset for a partner or friend.

If you're still interested in the device despite its issues, the it'll go on sale in December. If you decide to preorder through Sony before December 1, you can get it for $50 off, at least. Just head to Sony's online store to take advantage of that offer. If you want to pay the full price right now, for some reason, you can also preorder it from Amazon.

Football Manager 2020 arrives on the Play Store in two flavors, Mobile and Touch