Over the last few years, Fitbit has become synonymous with fitness tracking. While its earlier products tended to be simpler devices that focused on step tracking, the company has transitioned to more intricate wearables that combine best-in-class fitness tracking with the features and form-factor of a standard smartwatch. At the moment, you can pick up a Fitbit Versa for $120 at Amazon, saving $50 off the list price.

During our time spent reviewing the original Fitbit Versa, we were impressed by its multi-day battery life, exceptionally bright display, 50m water resistance, and its light, comfortable aluminum design. Being a Fitbit product, it should come as no surprise that the Versa is also a capable fitness tracker, with automated detection of heart rate, steps, and a variety of workouts. 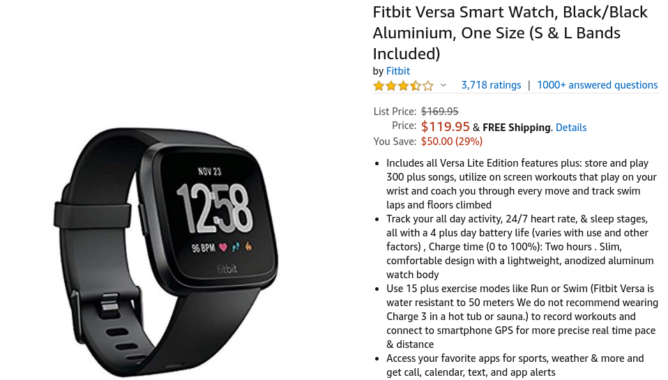 Of course, this isn't the only Fitbit watch currently on sale, as we covered a similar $50 off deal on the Versa 2 (which comes with updated specs and the addition of voice-activated Alexa functionality) just yesterday that brought its price as low as $150. No matter which one appeals to you more, you'll end up with a quality smartwatch for much less than other devices on the market. You may want to act quickly as this could be one of the last big discounts we'll see on Fitbit hardware ahead of the company's acquisition by Google.