A 360-degree action camera can be quite a fun device to have around. Besides being great for capturing panoramic videos during sporty activities such as biking or snowboarding, you can also use it to create interesting tiny planet photosphere pictures, shareable virtual reality videos, and use them in other interesting and creative ways. When 360-degree cameras first came out, they were quite expensive and hard to recommend to casual users. Thanks to companies like Xiaomi who often bring lots of value to the table, this type of camera is now within the reach of anyone who wants one. The Xiaomi Mijia, which has seen a few price drops previously, is now down to its all-time lowest of $125.49 ($74.50 off).

The Xiaomi Mijia Mi may not have the brand cachet of a GoPro, but it offers many similar features at a much lower price point: dual Sony image sensors that can shoot 360-degree videos at up to 3.5K at 30FPS, 6-axis electronic image stabilization, up to 75 minutes of recording time from its 1,600 mAh battery, IP67 water-resistance, Wi-Fi connectivity, and a free mobile app that takes care of the editing and sharing. 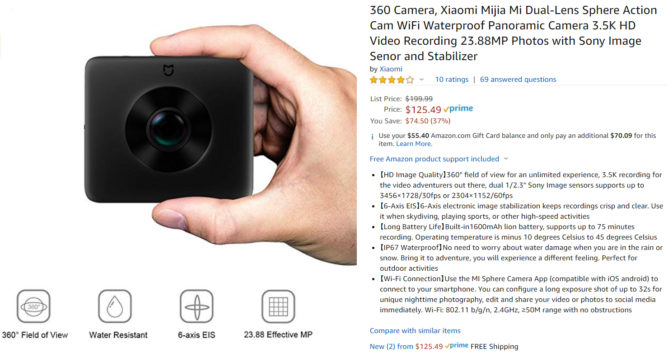 If you were interested in creating nifty 360° video footage and pictures but it was cost inhibitive for you in the past, now would be a perfect time to grab one before the sale ends.