Apex and Nova used to go toe to toe for launcher supremacy, but while Nova has continued to improve, Apex's fall from grace has been something of a spectacle. Last year's update to version 4 was met with criticism from users, leading the developer to exercise a partial rollback to the previous release. Now the launcher is back in the spotlight with a scammy-looking popup that recommends its own Privacy Browser when launching Chrome from the app drawer.

The few remaining Apex Launcher users have taken to the app's Play Store ratings and Reddit to complain about the new behavior. When they try to open Chrome, a popup shows up that gives them the choice to open Chrome or something called Privacy Browser, marked as an "AD." It's accompanied by a "Recommand" tag. The typo and the general presentation of the popup don't leave much more to do to make the ad look shady, and it even shows up in the premium, supposedly ad-free version of the launcher.

As it turns out, this Privacy Browser is distributed by the same Android Does Team Play Store account as Apex and seems to be a lazy Firefox Focus clone with an unclear business model — maybe the long-term plan is to display its own ads instead of those embedded in sites? Naturally, its Play Store listing has already accumulated an impressive average 1.3-star rating from angry Apex users, but at least the application itself doesn't seem to be malicious. 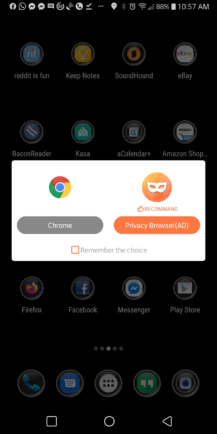 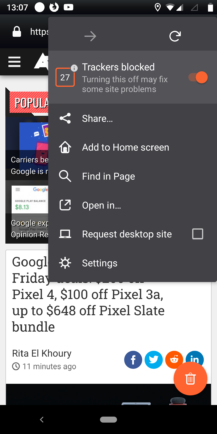 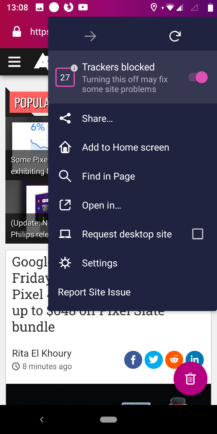 Left: The pop-up ad. Middle & Right: Privacy Browser and Firefox Focus next to each other.

We haven't been able to recreate the ad popup ourselves thus far, neither in version 4.9.8 that has just started rolling out nor in version 4.9.6 from November 7, when reports first started. Since so many people complain about the problem, there's a possibility that the developer has since deactivated the popup via a server-side switch, but it could also just take some time until it shows up.