Even though the Nexus 6P was considered to be one of the best Android phones back when it was released, a few issues soon became apparent. The processor easily overheated, a bootloop bug made quite a few units die prematurely, and lastly, a battery problem surfaced that led to early shutdowns anywhere between 50 and 0 percent. At least the remaining owners of this Nexus device don't have to worry about the latter issue anymore — according to Google, that is. An engineer just marked the early shutdown entry in the company's issue tracker as "fixed."

I don't know about you, but when I just retrieved my Nexus 6P from my junk drawer a minute ago, it didn't have an update pending. In fact, I'd be very surprised if Google managed to fix a hardware issue via a software update (though Apple can do just that, apparently), and even if it did, it would come extremely late considering the 6P's age. 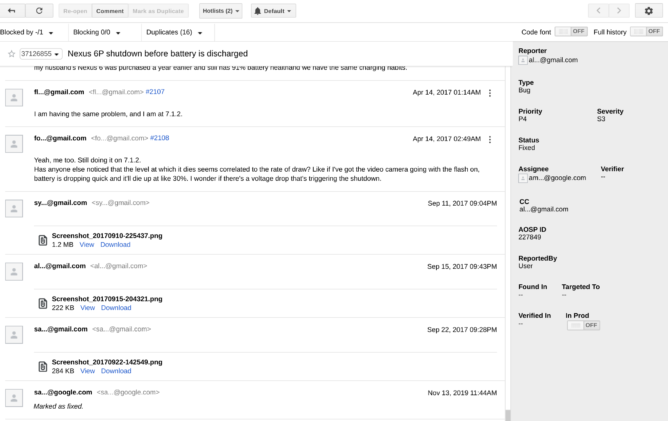 You need to scroll down all the way to the end of the issue tracker to see the "fixed" entry, so here's a screenshot.

Unfortunately, the issue tracker entry doesn't come with any further information on what exactly this fix looks like, but given that the last report of the problem was submitted in 2017, the Google engineer might've just wanted to clean up the pending section in the tracker. There's another possible background leading to the "fix:" Google settled a lawsuit with Nexus 6P owners suffering from the early shutdowns, and now that the legal fight is finished, the company might consider the affair over and done with.

Still, the notion that Google deems the problem solved is hilarious. After all, the legal settlement doesn't "fix" the underlying hardware issue, and even then, it's only a small reimbursement for a few owners in one of many countries where the phone was officially sold in.

A Googler has rectified the status of this issue, saying "Fixed" was an incorrect status. The right one is "Won't fix (Obsolete)," as we had all presumed, and that's what the issue tracker now says.

Google video shows off a Pixel 4 Motion Sense DJ setup — it's as awkward as it sounds ...