Every smartphone manufacturer wants to get in on the ground floor of the latest trends, and in 2019 the name of the game is “folding.” After teasing flexible technology at trade shows for years, we're finally seeing the arrival of big-screen phones that bend down the middle for easy storage. But other companies are turning to more old-school tech to accomplish a similar feat, like LG and its dual-screen hardware. After getting started with the V50, LG's back with its follow-up: the G8X with Dual Screen case.

While the G8X is very much a flagship smartphone in its own right, LG is clearly pushing this as a foldable solution to compete with the likes of Samsung's Galaxy Fold or the new Motorola Razr. And though it's technically possible to buy the phone by itself, thanks to some aggressive bundle deals it looks like the lion's share of new G8X owners will be going in on the ground floor with Dual Screen. So while I intend to touch on some of the G8X's biggest features, our real focus here is the phone's extra display.

Is this just going to be the latest phone gimmick to get its moment in the spotlight before fading into obscurity? Does having that extra screen really improve upon what the G8X is able to offer users? Let's dive right in.

As a regular smartphone, the LG G8X (and let's agree to just drop that whole "ThinQ" business right here) is pretty much what you'd expect from a flagship model: an iterative design that bumps specs a bit, changes a few hardware components, and tries introducing a handful of new features. Performance is good, but especially when you bring the second screen into play, I wonder if having more than 6GB of RAM would start delivering payoffs. 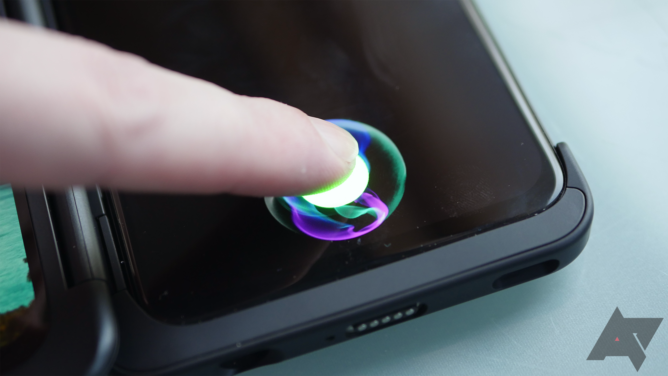 LG drops the face unlock (and correspondingly large notch for Z-cam) of the G8 and V50 in favor of an in-display fingerprint scanner. It doesn't work quite as well as the old solution, alas. Compared to the G8, a bigger 4,000mAh battery will come in handy when sharing power with that second screen.

Camera hardware gets an extra-wide-angle option that can capture some nice landscapes, and a new 32MP front-facer produces surprisingly decent selfies. There's an ASMR recording mode if you're into that creepy stuff — though I found it also great for recording snoring kittens if you're not. Stereo speakers have been tweaked for more balanced output, and I have to admit it does sound pretty good. I don't love the aesthetics of the latest LG UX software, which even when playing with all the settings looks a bit bloated to my eyes, but functionally it's fine.

This may feel like we're only just scratching the surface, but let's be real: You came here for that second screen. Without it, the LG G8X is a fine, if less than super-remarkable flagship. But is it just this one radical transformation away from becoming something really special? 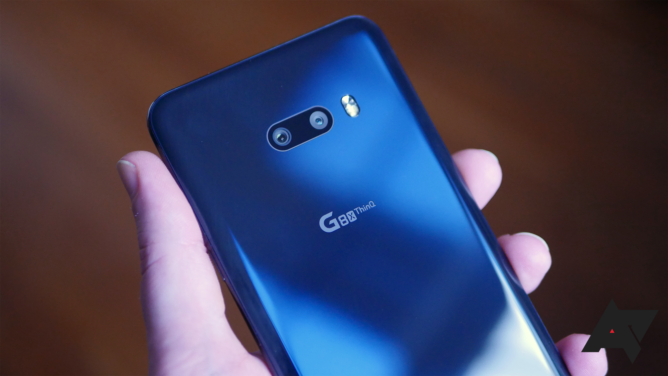 Enjoy that shiny back now because once you go dual-screen you'll rarely be seeing it again.

The functionality of LG's Dual Screen is simple enough: It's a wallet-style case, but instead of holding all your cards, the cover hides a secondary display within. You can interact with each screen separately, almost as if you've got two copies of the same phone. A draggable pop-up menu bubble lets you easily move open apps from one screen to the other, or shut the secondary screen off to save battery life. 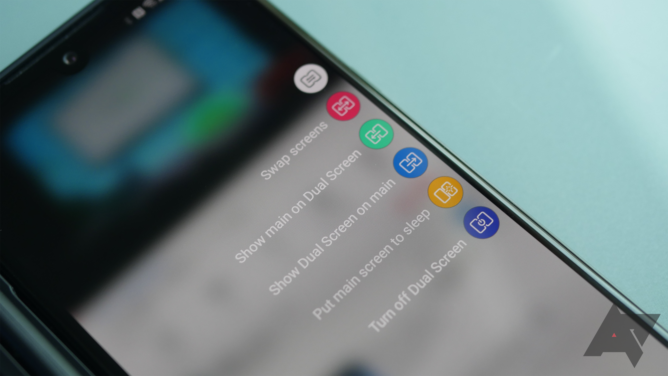 In addition to letting you use two full-screen apps at once, this setup also allows for some interesting schemes where one panel is used to interact with the other, like giving you a full-size keyboard on the bottom screen while you draft an email on the top. There's also a very flexible interface that lets you set up custom controller pads for gaming.

At a high level, I really like this idea, and think there's a good amount of potential here. But I also don't think LG has quite nailed its implementation.

I'm going to back up and talk about the V50 for a moment. While the US edition arrived without a Dual Screen accessory, the international model does support one, and I've spent a couple months getting to know it. It has its own set of quirks, like two different-sized screens, but I was basically happy, and just wanted a slightly smaller version of it — for it was a chonk. And since LG V-series phones tend to be larger than its G-phones, that shouldn't be a problem, right? Nope. 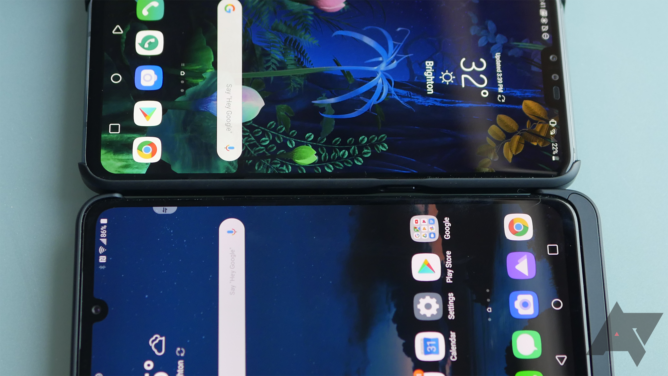 LG clearly went back to the drawing board for the G8X's Dual Screen case, and changed a whole lot about how it operates. While the V50's secondary screen strongly clicks into 90-degree, flat-open, and folded-back orientations, the G8X's can be comfortably set to any angle (while still offering a satisfactory click when opened flat).

We also get a new exterior display on the Dual Screen, with a small monochrome OLED panel offering time, date, battery status, and notification icons. The idea here's noble, but I hate how it all came together; a combination of low panel resolution and bad scaling gives the icons soft edges and irregular geometry, while the slowly refreshing OLED tears if you pan your eyes across it too fast. I acknowledge this is picky, but I really hate bad-looking screens. 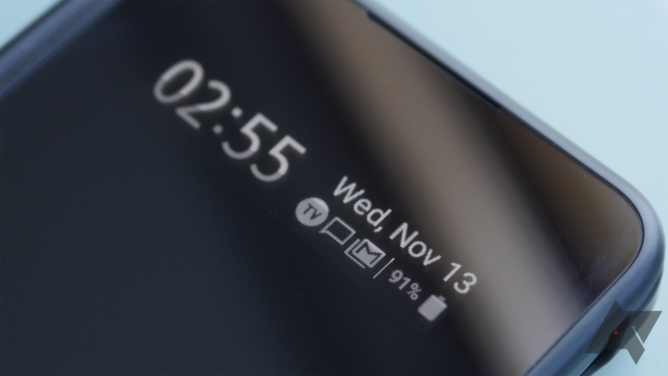 And then there's the power problem. And really, this is just so hugely dumb all by itself that it's almost enough to turn me against this new Dual Screen design entirely.

With the V50, the Dual Screen case gripped the handset largely from its sides, leaving the top and bottom edges of the phone exposed. This was a great idea: You preserved access to ports and mics, and power was sent to the secondary display through a custom pogo-pin connector. 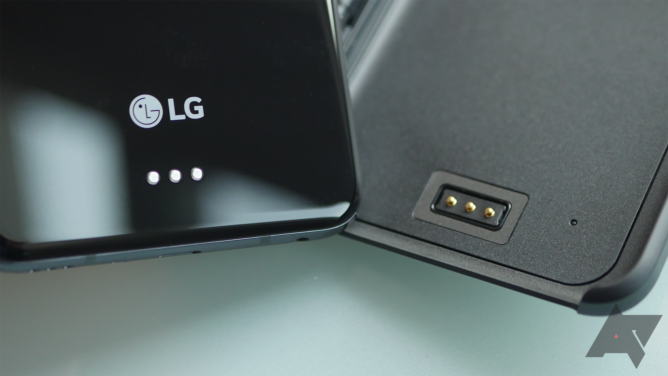 LG had the right idea with the V50 Dual Screen and its pogo-pin connector.

But on the G8X, LG has taken a hard turn. The case now fully covers both the phone's top and bottom edges, tapping into its USB port for power. That means your bezel just got bigger — while the first Dual Screen added just 2.4mm to the V50's height, the G8X becomes 6.6mm taller. If not huge, that is a step in the wrong direction. 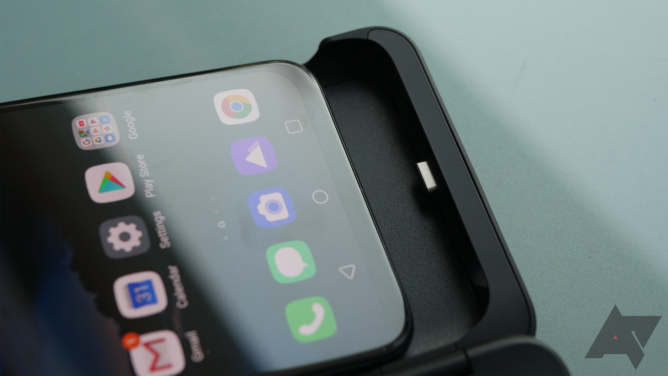 What's even worse is what this does to your ports. The bottom speaker and your headphone jack are now sunken, with narrow cutouts down into the case. As a result, the plug from my favorite headphones can't reach the jack at all. But what about USB?

Well, the Dual Screen itself is plugged into G8X's USB port. And while the bottom bezel is thiccc, it's not so wide that LG could comfortably squeeze another USB port in there. Instead, the manufacturer has elected to go with a magnetically attaching USB adapter. 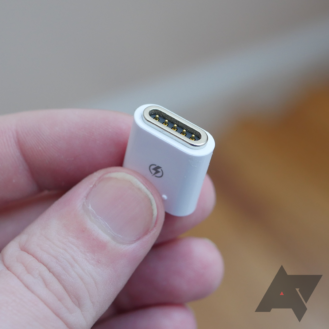 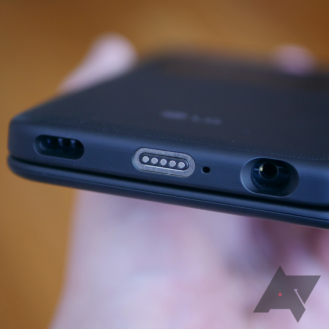 As you'd only expect, I lost the adapter a couple days into using the G8X, and until it popped up a week later I had to either remove the phone from the Dual Screen to charge it, or (the better solution) turn to wireless power, which works just fine through the case.

Even when you're not misplacing the adapter, it's just so unintuitive to use. Follow me for a moment here: USB-C has a reversible connector. The Dual Screen charging adapter also connects to the phone in either orientation. But while you can slow-charge the phone any way you connect it, USB data and (more critically) fast charging only work when the cable's attached the “right” way.

My mind boggles at how poorly this all works. I mean, come on: Magnets are polarized. It would have been trivial to design this such that the magnets repel when the cable's upside down. But no — after spending years acclimating users to reversible USB-C, this is a totally reasonable thing to do. Sure. 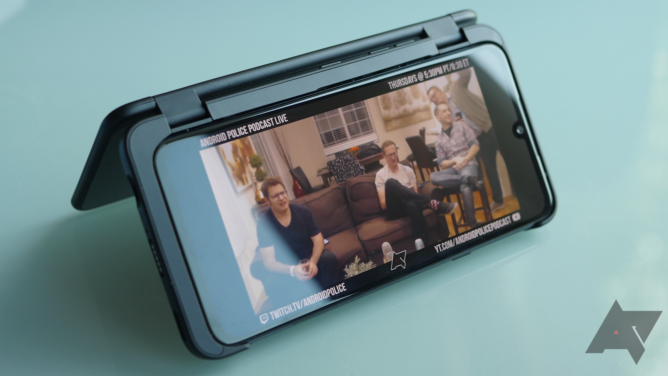 The Dual Screen happily serves as an impromptu stand for sharing videos.

None of this is helped by the connection being super weak. As I write, I'm trying to use the G8X as a hotspot right now, tucked into my jacket pocket, and connected over USB for power. But every time I shift in my seat the magnetic cable pops loose. Sometimes you want that for safety, but here it's just annoying.

Finally, I'm not too happy with the screen quality itself. I can live with the useless notch (cutting LG a break so it can save a little money making this thing), but the panel on my review unit is poor, with slightly diagonal stripes all the way across. I'm used to LG screens being a little hit-and-miss, but this is one of the worst I've come across.

Contrast dialed way up, but check out those stripes stretching across the Dual Screen display. This should be pure white.

LG's been clear that it's not pursuing bendable-display folding phones at this point, so if this general trend continues, I wouldn't be surprised to see the company try its hand at another Dual Screen accessory. I just really hope LG takes a good, hard look at the G8X first, and learns from some of these serious missteps.

LG G8X Dual Screen
7/10
Maybe. LG's second-gen Dual Screen effort is very much still a work in progress. A couple things are better this time around, but we also get some big new problems at the same time. To an extent, the coolness factor of having two displays helps soften that blow, but be prepared for some awkward moments. If you really love this design, your smartest bet is probably waiting for a good deal — and thankfully Black Friday is just around the corner.
subscribe