The YouTube app is only two years younger than Android itself, but it has always lacked some features compared to the service's website. Among them is the ability to sort a channel's videos and playlists, which you could historically only view by date added. A new A/B test finally gives the app the same sorting options that have been available on the website for a long time.

The option shows up when you visit a channel and swipe over to the Videos and Playlist tabs. On top of both lists, you'll see a new dropdown menu, appropriately labeled Sort by. Tap it, and you'll have options to view the most popular, oldest, or newest videos and playlists first. 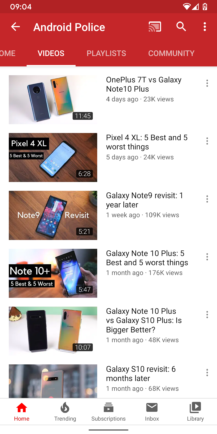 Left: The old interface without a sorting option. Middle & Right: The new interface adding a Sort by option at the top of the list.

The feature is apparently already more widely available on iOS, but since it's a highly requested option among us Android users too, it hopefully won't take Google too long to roll it out widely. The sorting dropdown showed up for our tipster on YouTube version 14.43.55, which you can download over at APK Mirror, but there are already newer versions available. Either way, having one of the latest releases might help you get in on the test.

The 'sort by' options should now be available to anyone using the YouTube app. We've seen them show up in version 14.46.51, but as with many things in the YouTube application, these changes may not be version-dependent. Google Play Store autoplay videos are coming, but you'll be able to turn them off