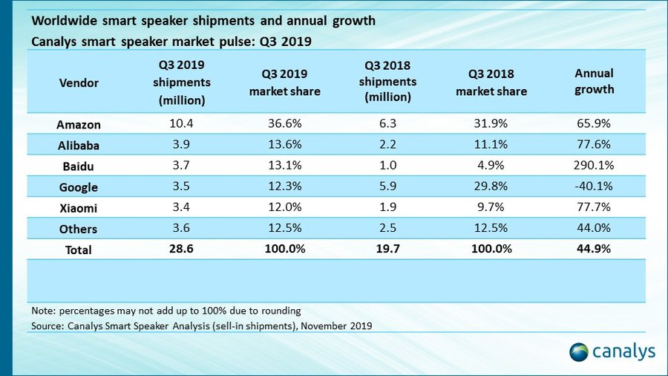 Amazon was the biggest winner here with a shipment of 10.4 million smart speakers, experiencing a 65.9% annual growth to secure 36.6% of the global market. Despite each company shipping less than 4 million units, the top three Chinese vendors did pretty well, posting high double-digit annual growth rates to collectively take up 38.7% market share. Google was the biggest loser, slipping to fourth place with year-over-year decline of 40.1%. Just one year ago, Google was within striking distance of Amazon, with a market share of 29.8% in Q3 2018. Now, it only occupies 12.3% of the market, ahead of Xiaomi by only 0.3%.

The analysts at Canalys attribute Amazon's success to its stellar Prime Day performance, successful "Echo Upgrade Program," as well as its effective back-to-school and off-to-college shopping campaigns. Google, on the other hand, hasn't launched any new smart speaker products aside from the Nest Mini. Amazon has released so many speakers it can be hard to keep track. When it comes to smart speakers with displays, Amazon and the other companies grew the segment 500% globally, making this the first time for smart displays to cross 20% share and become a key category of their own. 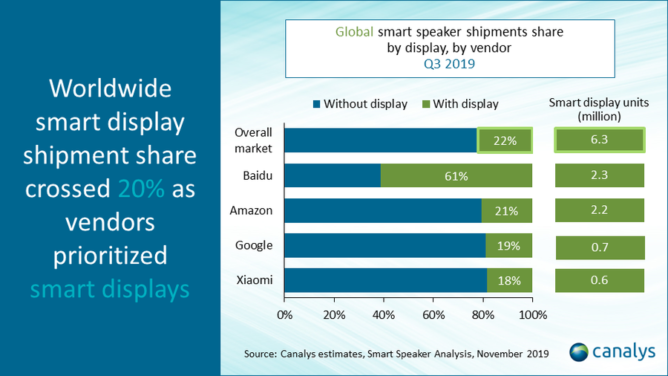 Although smart speakers and smart displays are experiencing healthy growth right now, Canalys states companies face several challenges to maintain this market momentum. The prices have to be appropriate, and consumers need to be further convinced these products are useful. Google ought to take heed lest it falls off the top five rankings next quarter.

Carriers be damned: Google is rolling out RCS messaging in the US

Moto Razr has a hinge 4 years in the making, IP68 rating, and other tidbits