How do you pronounce quokka? Pronunciation can be difficult to perfect, especially with a language containing as many silly, varied rules as English. Practice, though, helps solidify a skill. Google has provided pronunciation guides since April of this year. Now, they'll also give you the chance to vocally practice your pronunciation of American English, and, "soon," Spanish.

When you Google how to pronounce an American English word on mobile, you'll now see a button with a microphone icon and the word "practice." Tap that button, say the word into your phone's microphone, and Google will let you know how you did. It compares what you said to the phonetic spelling listed and gives you tips on how to improve.

This feature launches alongside another aid which provides images to compare when you look up the translation of a word. If you look up, "perro en ingles" you get pictures of doggies along with the translation to help your brain make the connection between the two words. I tested out both of these features and got some interesting results.

According to Google, I'm having issues pronouncing elements of "focaccia," "latke," "felonious," "anemone," "langoustine," "teeter," and a myriad of other words. Ironically, I nailed "otorhinolaryngologist" on the first try. To be fair to Google, it didn't say I was mispronouncing the words outright, but that I might be having issues with specific sounds, like F or K — maybe they just sound right to my untrained ear.

The images paired with the translations I looked up yielded more satisfying results. As I said before, "perro en ingles" showed me doggies. "Naranja en ingles" brought up pictures of oranges. "Butter in French" showed me some photos of delicious butter as well as teaching me the word beurre. This feature's there for the same reason we have pictures in vocabulary books: seeing those photos, along with reading the word, and hearing the pronunciation, helps cement that idea in our heads. 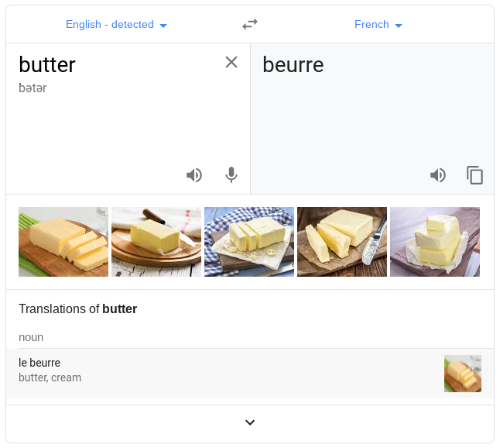 Both of these features are helpful, although the pronunciation practice may need some work to get it up to snuff. In the meantime, don't get discouraged if it sounds like you're saying something correctly and Google disagrees. This might make traveling or trying to pronounce a word you've only read before a little less daunting, and hey — what really matters is that you're trying.

Even game developers are nervous Google could kill Stadia