Google can't seem to catch a break: Just after covering earlier today that it finally "fixed" the early shutdown issues on the Nexus 6P, we've now spotted reports of a more recent flagship series showing similar symptoms. A few Pixel 3 and 3 XL owners are complaining that their battery life is getting unreliable below the 30% mark. The problems range from sudden drops to outright shutdowns.

The reports first started surfacing in Google's support forum in April, and since then, every fortnight or so another Pixel 3 owner chimes in. For most, the trouble starts when their devices have about 20 to 30% battery left. Some can literally watch the battery trickle down to zero like a countdown, followed by an immediate shutdown. Other Pixel units just die on their owners without any warning. 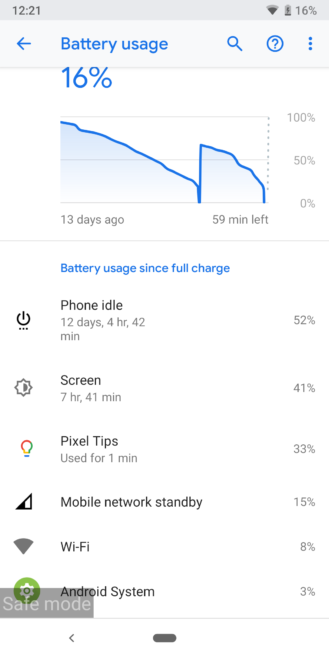 Even when the phone is in safe mode, it exhibits the early shutdown symptoms.

Google is having a hard time admitting the issue; it's asking owners to perform factory resets and wants them to try using the phone in safe mode, but the problems persist. The company is probably trying to avoid a lawsuit similar to the one it had to deal with after many Nexus 6P units developed the same symptoms (and a notorious bootloop of death situation). This stance doesn't help customers, and most can only RMA their devices after they've jumped through Google's troubleshooting hoops. Even then, some people report that their replacements show the same early shutdown problems after a while.

The issues don't seem to be as widespread as the Nexus 6P woes just yet, but as more devices and their batteries are aging, that might change. Batteries are delicate chemical cocktails that can come with many potential problems, especially as they age. Let's hope the Pixel 3 power supplies aren't as flawed as the Nexus 6P's, and the incidents remain isolated and covered by Google's warranty. After all, any device powered by a lithium-ion battery will eventually run into these issues; the question is just how soon that will happen.

Google Assistant is rolling out in Portuguese (Portugal)

PAYDAY: Crime War will shut down next month, may return in the future