Terabyte microSD cards, incredible though they are, are still wildly expensive. For us mere mortals, the next best thing — 512 gigabytes — is much more attainable. That's especially true today: you can snap up a 512-gig card for just 80 bucks from Amazon or B&H.

If you're trying to decipher those hieroglyphics on the card's face, let me make things a little simpler: SanDisk's Ultra cards aren't as fast as its Extreme ones, but they're plenty quick enough for most tasks, with read speeds up to 100 megabytes per second and a minimum write speed of 10 megabytes per second. 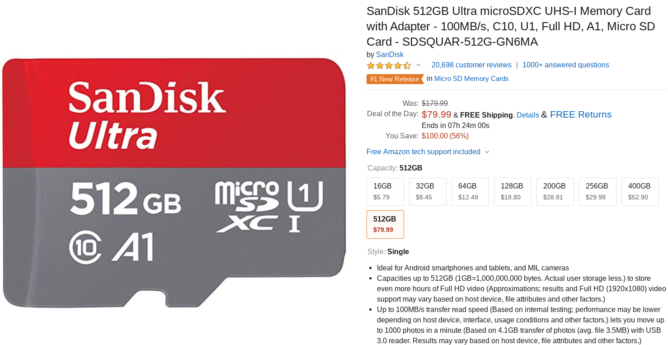 While it's not as impressive a bargain, the 256-gigabyte version is down in price too: it's only thirty bucks today on Amazon. If you're in need of the storage, though, shake a leg. The deals on both the 256- and 512-gig expire at midnight Pacific time on Amazon. B&H's deal ends even sooner, at 9 p.m. Pacific.


If you're kicking yourself for missing this price the first time (or you could use a second giant memory card, you digital hoarder), you're in luck: 512-gig the SanDisk Ultra is back down to $80 on Amazon today. Get it while it's hot.