Samsung kicked off the Android 10 beta program for the Galaxy S10 family last month, and it's already released a couple of updates. Today, there is a new OTA rolling out for the S10s in South Korea and the UK — this will be the third update for Korea, but only the second for the UK and other regions that follow the same cadence. As for the US, there are still no signs of the third update.

The third One UI 2.0 beta update (build ZSK3) for the Galaxy S10 brings along a slew of bug fixes and performance enhancements, enumerated in the screenshot below:

Screenshot from a UK Galaxy S10 on the second beta update (but third for other regions).

In addition to these welcome optimizations, Samsung has also begun the rollout of Samsung Daily, a replacement for Bixby Home the company mentioned during its annual developer conference in San Jose last month. According to our tipster from the UK, Samsung Daily became available on his Galaxy S10 after updating to the ZSK3 beta build and performing app updates inside Samsung's Galaxy Store. For all intents and purposes, Samsung Daily still looks very similar to the older Bixby Home's card interface, which may be a disappointment to some. We have some screenshots of what Samsung Daily looks like below.

In Korea, the rollout of the third beta update has already commenced for the S10e, S10, and S10+. The update has also been spotted in the UK. The US models, however, have yet to receive the update. We will update this post as more regions and models receive the third One UI 2.0 beta update.

The One UI 2.0 beta 3 update commenced rolling out yesterday afternoon for US Galaxy S10 owners. The size of the download varies depending on the S10 model and carrier SIM card inside the device. On my unlocked Galaxy S10+ with a SIM from Sprint, the size of the update file was 605.67 MB. 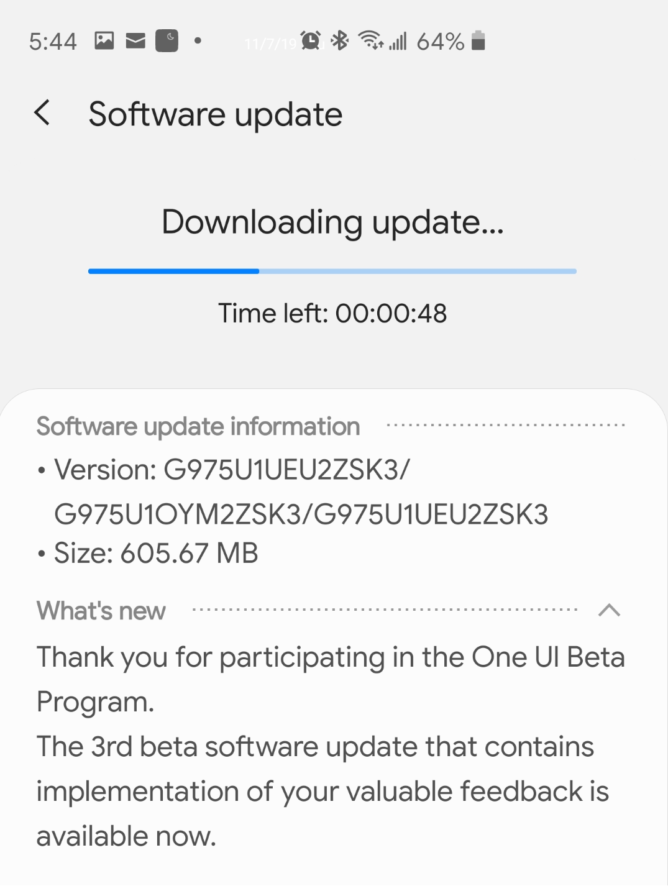 Unlike our UK tipster's Galaxy S10, the new Samsung Daily app that replaces Bixby Home was not present in the Galaxy Store. Otherwise, the fixes and enhancements in the US One UI 2.0 beta 3 update are identical to the other regions.