Two years ago, I tried using an iPhone as my full-time smartphone for the first time ever. I wasn't a complete iOS novice — I've owned iPads in the past — but it was the first time I'd actually had to live inside Apple's walled garden. There were a lot of things I didn't like about the experience, and many of them still hold true today. But the Apple Watch was new territory for me. With the launch of the Series 5, I decided it was time to take the plunge back into the world of iOS, and over a month later, I think I can try to convey just what the hype is all about.

A trip to the Apple Jewelry Store

I don't love going to the Apple Store, but if you want the newest version of the Apple Watch around launch day, it's basically your only option. Apple isn't even shipping many configurations of the new Series 5 until December, because it keeps almost all of its initial stock at its retail locations. There is no particularly good logistical reason for this: it is just about getting you in the store. Apple wants you to come in, browse the bands, feel the watch on your wrist, and come away with a product you feel you had a part in defining, a look personal to you (read: upsell you). I can see why it works.

And Apple's retail packaging just keeps telling that story of specialness, of care and attention to detail: the Apple Watch's box opens like a delicate piece of origami. I'm not going to lie: even the thing the Watch comes in is basically a piece of art in its own right. It makes the experience feel special.

I opted to configure my 44mm Series 5 on Apple's web store for pickup, choosing a gold aluminum body and black Milanese loop band, a combination that I think makes it obvious why the Apple Watch is so immediately recognizable: it looks like nothing else. 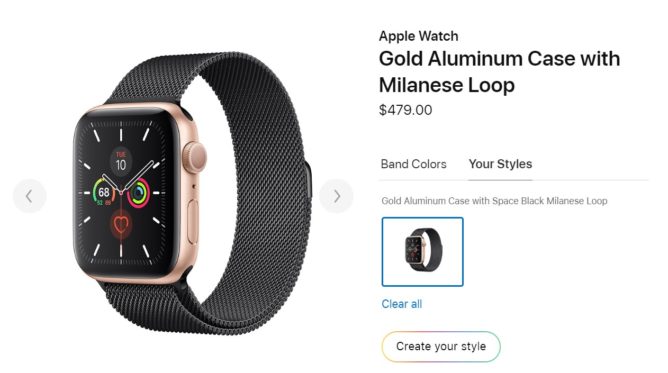 Watch enthusiasts scoffed at the rounded rectangle when Apple debuted the Watch four years ago, but that unique aesthetic has come into its own. Apple is a company that has learned how to package and sell an image, and the Apple Watch has arguably done that better than any Apple product in history. Expensive upgrades to stainless and titanium cases and linked and designer bands have been eagerly gobbled up by the Apple faithful, and it's no wonder why: a watch is something everyone can see, a form of jewelry, as opposed to a smartphone sequestered away in a cumbersome case or a pocket. It only makes sense that customers would be willing to pay a premium to customize the aesthetic of a product that is inherently about showing off a bit.

And whether you've obstinately rooted yourself in the anti-Apple Watch camp or not, it's impossible to deny, too, that the Apple Watch has become a real fashion statement. For better or worse, it has become a wardrobe staple of many of some of the most visible haves in our society, and that has largely mooted arguments about what a watch is "supposed to look like."

I walked out of that Apple Store $480 poorer, but I got the watch I wanted. And I think there is so much to be said for a customer experience for a product like this that really is all about options — there are hundreds, probably over a thousand, possible configurations you could end up with, ensuring that an Apple Watch can, at least in terms of others you're likely to encounter, be somewhat-uniquely yours.

OK, but what about as a smartwatch? 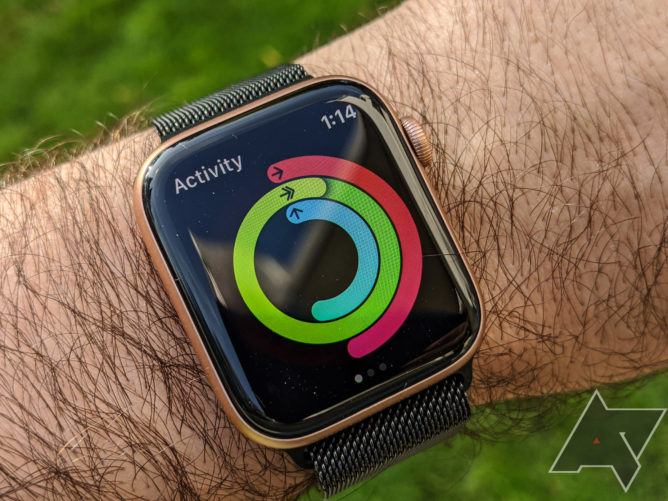 The Apple Watch Series 5 is Apple's latest iteration of its wearable, and it brings two major changes over the Series 4: an always-on display, more on-board storage (now 32GB), and... a compass (random, I know). All in all, the changes over the outgoing watch are minor, and they don't really affect your day to day usage in meaningful ways. So, what you should know is that a Series 5 is basically as good a smartwatch as a Series 4.

What makes Apple the clear king of the smartwatch hill has been something I think long-time Android users are going to have a hard time understanding, at least in a holistic sense. There are some big things: Apple's fitness tracking is truly excellent, for one. But there are so many other ones — haptics, performance, battery life, data visualization, touch interaction, responsive voice controls, actual 3rd party apps — that add up to a true feeling that the Apple Watch is a complete, refined product. It's a feeling I've never had using a Wear watch, and it just make you realize how far Google, Samsung, and other smartwatch makers are behind Apple right now. The Apple Watch is so good that I actually feel compelled to use it, to pay attention to what it tells me, and I don't feel endlessly frustrated when trying to interact with it for more than five seconds. 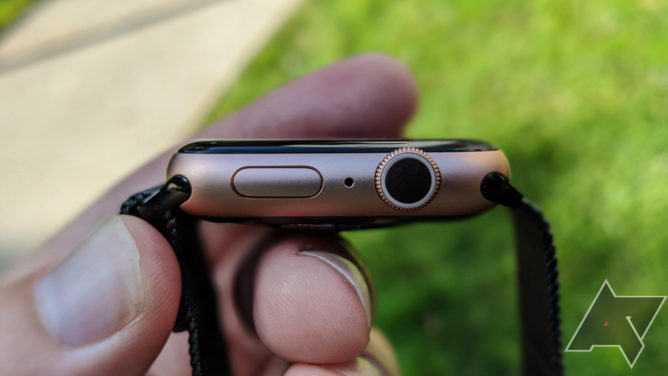 For one, performance on the Apple Watch is outstanding. Certainly, its little dual-core processor can stutter a bit launching an app occasionally, but it never feels truly bogged down or as though it's falling behind. This is most evident with voice interactions: I just hold down the crown and immediately begin speaking, and Siri doesn't miss a beat. For as useless as Siri can feel on the iPhone, she's a far better assistant on the Apple Watch because of that excellent performance and inherently limited scope of actions she's useful for there. The Apple Watch has become my new favorite timer and alarm device at home as a result.

Performance in third party apps is also almost always excellent, and those apps generally are a lot more thoughtfully designed than anything I ever saw on Wear OS. Managing podcasts on the official Pocket Casts app is easy and the playback controls pop up automatically when I start a show on my phone (not generic media controls, either: the actual app, which includes skip, speed, and volume boost controls). I literally just topped up my Starbucks card on the watch while writing this using the official Starbucks app with Apple Pay, and it was actually faster than trying to do the same thing on my phone. I can quickly access my 2-factor codes in Authy, which is legitimately useful if I'm on a new device or my laptop and don't want to reach for my phone. And the other thing: all of these apps work well. They're fast, they don't crash, and Apple's design guidelines keep their interfaces incredibly simple.

Also, I hate to break it to everyone: it is way easier to interact with a tiny rectangular screen with no awkward raised bezel around it than a round one with a bunch of edges you you can't actually reach. Circular smartwatches are an objectively worse experience from a touch interaction perspective — I am never going back to one. 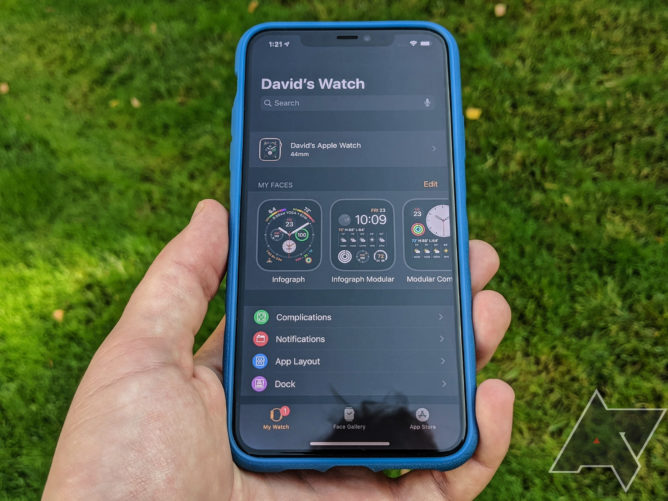 The Apple Watch companion app is as powerful as it is well-designed.

As you've no doubt read before, the Apple Watch also just feels more tightly integrated with your smartphone. Support for things like playing back voicemails, a quick toggle to find your phone, synced voice memos, turn-by-turn navigation integration that actually works well, a remote camera viewfinder, location sharing, walkie talkie functionality, a full phone dialer app, and more don't individually make the Apple Watch unique, necessarily, but they're all native functionality that Apple has designed to work with the iPhone. They aren't apps developed by teams with no investment in the platform, who might decide to just give up support for their features because of an API change or the platform as a whole not being seen as a worthwhile investment.

Apple can act as a far more united front because Apple as an organization cares about making the Apple Watch a good product experience — it's not worried about things like user base or maximizing engagement. Apple is first and foremost concerned with making the watch feel like a natural extension of your smartphone, rather than the mishmash of features and haphazard first-party app support that have been the hallmarks of Wear OS.

Apple's fitness tracking "rings" are a thoughtful approach to monitoring your activity levels. Its ECG tech is legitimately innovative, and potentially lifesaving, stuff. Fall detection, mindful breathing exercises, and automatic workout detection (that actually works) confirm to me that Apple's interest in holistic wellness are more than fleeting: this is a company that wants to understand what it can do to make managing your health and lifestyle more informed, more fun, and like less of a chore. Many people are highly interested in data about their health and activity levels, and I think Apple is at the forefront of the movement to visualize and interpret that data in ways that are more actionable and more relatable to those of us who aren't obsessive stat-keepers. Google's acquisition of Fitbit makes it clear that this isn't an easy problem to manage, and to date, Google's one fitness product, Fit, has been painfully slow to evolve, and is far from what I'd call a "smart" fitness platform. Really, it's one step below actually dumb. 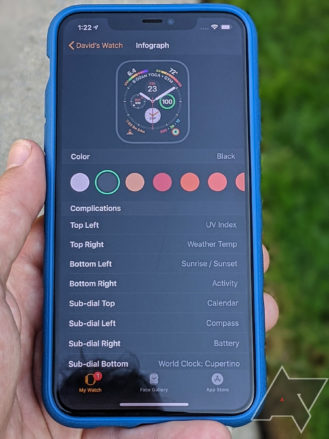 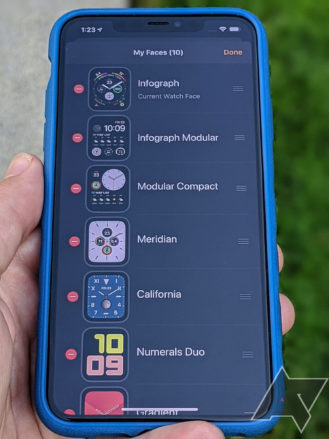 I could go on: the haptics on the Apple Watch are sublime, just as they are on the iPhone. The speaker is surprisingly powerful. The data visualizations on the watch faces are outstanding and highly configurable (I get temperature, UV, sunrise and sunset, a world clock, battery, calendar and events, a compass, and activity tracking on a single face). Settings are shockingly robust, and notification management is easy and powerful. I get the better part of two days on a charge, even with the always-on display enabled.

I have not had one — and I mean a single — disconnect or pairing issue in the entire six weeks I've been wearing it. I've restarted it a handful of times (mostly because the battery died and I forgot to charge it overnight), but it's never become sluggish or acted weird or freaked out on me. It is a remarkably stable product. Apple Pay works well (you can even use the watch as an authenticator for paying on Mac OS), automatic workout detection is great, and Siri is perfectly adept for voice responses to incoming messages.

In short, I'm going to tell you the same, frustrating thing you've heard about certain Apple products for years: the Apple Watch just works. And in a world of buggy, technologically hamstrung, frequently developer-orphaned Android-compatible wearables, that puts it head and shoulders above anything else out there. It's the only smartwatch I'd recommend to anyone, because it's the only one that actually feels like the company making it gives a damn. 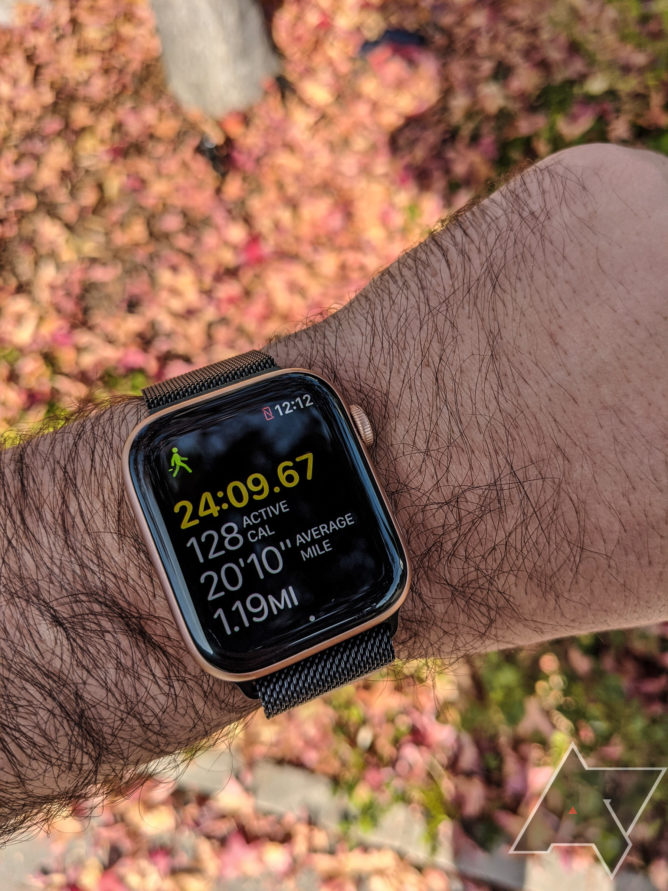