Xiaomi and Samsung have been teasing a new 108MP camera module for quite some time now and shared that they're working together to bring the first 100MP+ phone to the market. This device has now been introduced as the Xiaomi Mi CC9 Pro. Other than the 108MP sensor, it sports four more lenses on its back, making it look almost as ridiculous as the Nokia 9 PureView. The phone is coming to international markets as the Mi Note 10.

The f/1.7 108MP Samsung Isocell Bright HMX is accompanied by both a short and a long telephoto with an aperture of f/2.0 and 12 and 8MP, respectively. An ultra-wide f/2.2 20MP lens and an f/2.4 2MP macro round out the package and should provide owners with ample options to photograph anything they'd possibly want to — this collection of lenses allows for 10x optical zoom and 50x additional digital zoom. 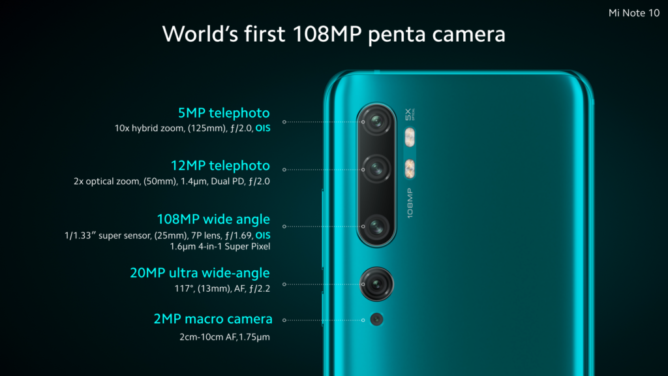 Let's hope the software can make good use of all these different hardware pieces. The phone does top DxOMark's camera testing chart already, though you should take its results with a healthy dose of skepticism (seriously, loads of it). Still, there's one interesting tidbit the company found in its test. The 108MP lens only outputs 27MP images because it bins together four pixels as one during processing. This is supposed to reduce noise and make photos sharper, but you're also not getting full 108MP results.

Other than that, the phone seems like a fairly standard device sitting between other 2019 flagship and mid-rangers. It comes with Snapdragon's first "gaming" chip, the 730G, 6 or 8GB of RAM, and 128GB or 256GB of storage while checking most of the boxes that need to be checked in a smartphone these days: USB Type-C, an optical in-display fingerprint reader, an IR blaster, NFC, dual-SIM, and even a 3.5mm headphone jack are all on board. Wireless charging is missing from this list, but with the 5260mAh battery fully rechargeable within 65 minutes thanks to an included 30W power brick, you should be able to get over it. As expected, Xiaomi today launched the device as the Mi Note 10 and 10 Pro in Spain and announced they'll be sold in Europe starting November 15. The 6GB/128GB model will be available for €550 and the Pro version with 8GB/256GB will go for €650.

We've also added some more images of the phone to the original post above.