Fossil's hybrid smartwatches have leaked a few times already, but now the company is ready to make things official. Today, Fossil Group revealed its new Hybrid HR smartwatch, which promises over two weeks of battery life on a single charge while retaining most of the functionality that people use smartwatches for.

There was some debate over what operating system Fossil's hybrid watch would use, since the interface in previously-leaked images looked an awful lot like Wear OS. However, there's no mention of Google in the announcement, and the 'Fossil Smartwatches' app will be required to pair it with a phone, so the company seems to be using its own software stack. Fossil says the Hybrid HR should last more than two weeks on a single charge with all features activated, which is far longer than the company's current Wear OS watch can manage. You might expect the extended battery life to come with less functionality, but the watch still can do most typical smartwatch functions — including activity/sleep tracking, heart rate sensing, alarms, displaying notifications, and controlling music. The watch is even 3ATM water resistant. 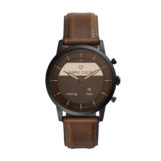 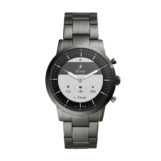 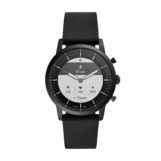 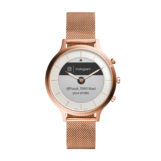 Some variants of the Fossil Hybrid HR

The Hybrid HR uses physical clock hands on top of a "power-efficient display" (presumably a form of e-ink), so there's no LCD screen using up the watch's battery. Fossil says there is a built-in light so you can still read the time in dark environments, but none of the provided images show that in action. The case size is 42 mm across, with a display size of 27 mm and a thickness of 11 mm.

Two models are available: the gold Charter HR and the darker Collider HR. Depending on the band and case style you choose, the price will be anywhere from $195 to $215. You can purchase them today from Fossil.com, select Fossil physical locations, and a few online stores.