Before Android 10's official release, an automation feature called "Rules" was discovered during the beta phase that many hoped would make its way into the final build of the OS. Although it didn't appear as feature-rich as Tasker, it seemed like a good starting point for Google to build on. After being absent for a while, the Rules feature began popping up for certain Android 10 Pixel users as a server-side update. If you'd rather not wait for Google to activate the feature for you, there is a short and simple method available now, assuming you have a rooted Pixel phone running Android 10.

The steps required to activate Rules on a rooted Android 10 Pixel device were shared by Redditor rohanbathla007, and they're as follows:

To make access to the Rules menu faster and simpler, you can force it to appear inside Settings under the System sub-menu by launching a terminal app on the phone and typing in the following code:

You'll know you have succeeded when your screen looks like this: 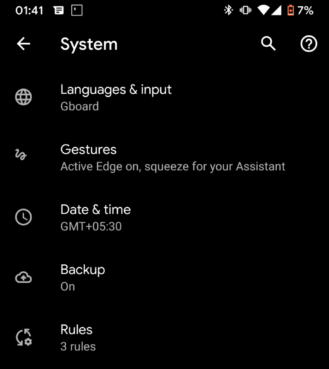 As mentioned earlier, Google's current implementation of Rules is very elementary. If you're in need of something more powerful, then consider either MacroDroid or Tasker.

And please note that just because you can do this, it doesn't mean you should. The Rules feature has already started rolling out to Android 10 Pixel users, albeit slowly, and rooting your phone means you have to be extra security-conscious.