Among Android tablet manufacturers, few make premium tablets as nice as the Galaxy Tab S series from Samsung. If you had decided to skip out on the Galaxy Tab S4 earlier due to its high price, then you may want to take a look again. Several stores — Samsung, Dell, Amazon, and Best Buy — are selling the WiFi 64GB Galaxy Tab S4 at its lowest price ever of $450, 31% off its MSRP.

When the Galaxy Tab S4 came out last year, we liked it for its gorgeous 10.5" AMOLED screen, massive 7,300 mAh battery, and its low weight. As a media consumption device, the Galaxy Tab S4 excels with its 2560 x 1600 high-contrast HDR screen, Dolby Atmos speakers, and its 16:10 aspect ratio. Plus, it officially supports microSD cards up to 400GB for further expansion of your picture and video libraries, something you can't do with iPads. 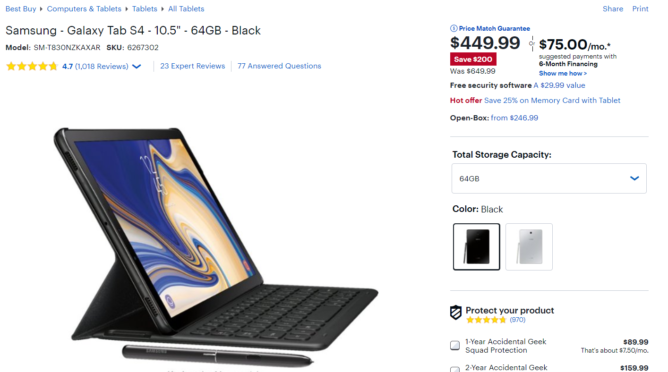 The Galaxy Tab S4 also offers some nice features for those focused on productivity — the S pen for note-taking and drawing, and an optional keyboard cover and Samsung DeX to transform your tablet into a laptop-like device. Ultimately, we didn't end up recommending it last year due to its $650 asking price and lack of Android app optimizations in general. At $450, however, the equation changes a bit.

In addition to that base deal, Best Buy also offers shoppers the option to purchase the Tab S4 in differently priced open-box configurations.

Today only: pick up an Ecobee thermostat at Best Buy and get a free Switch+ ($80 value)