I'm not too heavily invested in the Office ecosystem — the convenience and integration of Google Drive/Docs/Sheets in the products I use have long provided a better service for me — but I spent a bit of time playing around with the latest version of the Office mobile app to see what it's like. It's actually changed a bit since the first time I used it on Samsung's phones earlier this year.

If you don't have a bunch of files already stored locally, the app looks pretty bare. Creating files locally happens via the big red floating action button in the bottom center, following which are a set of nested menus for choosing what type of document you'd like to make — Excel, Docs, a note, that sort of thing. The menu is functional, but the secondary nested "Documents" menu would be a little less jarring if it didn't bring you to an entirely different screen once opened.

Office files you create on the phone are automatically saved to OneDrive by default. If you need to navigate to documents at a file level, you can do that via a browser that shows both local storage and your Microsoft/OneDrive account storage, plus any documents that have been separately shared to your account. In addition to the floating button for creating documents, you can also access more specific actions like document sharing, PDF creation, and optical text recognition for document creation via the Actions tab.

In all cases and for all document types, you don't need the base app installed, either. So, for example, you can read/write Word or Excel documents without having those apps installed separately; it's all just integrated into Office mobile. There are a few drawbacks, though. PDFs don't offer too many view options, and although notes sync with the "Sticky Notes" application on Windows, neither has very advanced options for things like checklists. Saving documents can also take a while, and I ran into an issue where an Excel sheet was duplicated into a second file while opening it. 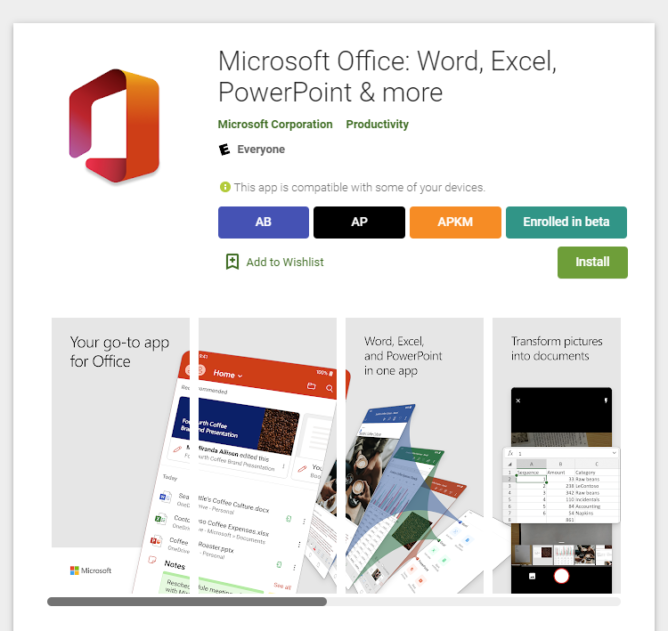 The Play Store listing (above) won't appear until you are enrolled in the beta.

If you're interested, the Office mobile app is now available as a public preview on the Play Store, though you have to jump through a few hoops to install it. You'll need to join the associated preview group here and opt in on the preview program before the Play Store listing will appear for you. If that's too much work, you can also just download it over at APK Mirror.

Save up to 24% on Samsung microSDXC Evo Select memory cards, starting at just $6