Google wanted to add a new API for file management called Scoped Storage to Android 10 that fundamentally changes apps' access to files. After enough developer backlash, the company decided to introduce a legacy flag for the old file access API and leave Scoped Storage completely optional until the next major OS release, though the fundamental critique remained unaddressed. According to an Android Dev Summit 2019 talk circulating on Reddit, some changes are headed developers' way. Google is considering allowing certain apps like file and backup managers access to a wider range of data while others will be stuck using Scoped Storage.

To recap, Scoped Storage only allows apps to read and write data to their own sandboxed folders and gives them access to data like music, video, photo, and audio in dedicated shared folders. The change is supposed to make it harder for spyware or malware to break out and achieve some mischiefs, and the system should become better at deleting all of an app's files upon uninstall. 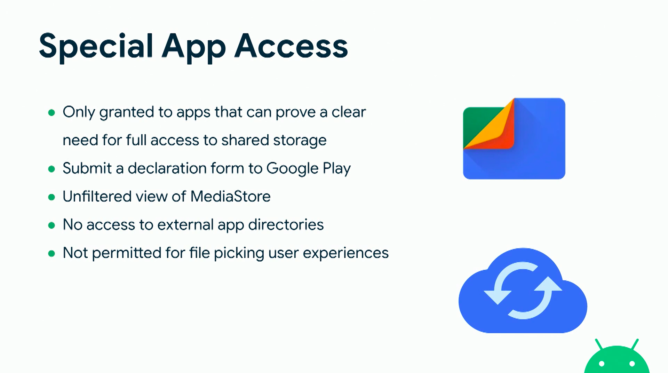 In an Android Dev Summit video, Googler Zimuzo Ezeozue talks about how apps like file and backup managers will be able to ask for exemptions from Scoped Storage if they can prove they need it. To do that, developers will have "to submit a declaration form to Google Play." Only then will they be able to get access to all files (with user permission). Sandboxed data from other apps will still not be available for any other app to see in the next release of Android, though — the main idea behind Scoped Storage is that applications shouldn't be able to read and write files wherever they like anymore.

The situation feels reminiscent of Google's SMS and call permissions policy. Developers have to submit a form to receive an exemption from the company's crackdown on abuse of calling and messaging features. Many apps, like Cerebus, were crippled in the processes, while others, like Tasker, could successfully secure the permission on a seemingly arbitrary basis. We can only hope Google learned from the problems that came up back then and improves the process for Scroped Storage. After all, there are a ton of applications that are neither file managers nor backup products and that still need access to all files, like APK extractors or app managers.

The Scoped Storage exemption form isn't available in the Google Play Developer Console yet. It'll probably go live shortly before or during the beta for Android 11, and Google might still revise the exact terms and conditions until then.