Media companies want you to consume their content. The more you watch, read, listen, the better it is for them, and it's even best if they can require no active decision on your part to shove content into your ears and eyeballs. That's why things like autoplay and automatic video previews exist, and YouTube is one of the practice's worst offenders. The Android app is now testing another place it can automatically play videos for you — in your subscriptions tab — but thankfully, you can disable the option.

First, there's a small change in wording and settings. The feature used to be called Autoplay on Home and was found under the Autoplay section of YouTube's settings. That was confusing, as everyone equates "autoplay" with the video queue moving to the next recommendation after each video ends, and not with videos playing while you scroll through your home feed. 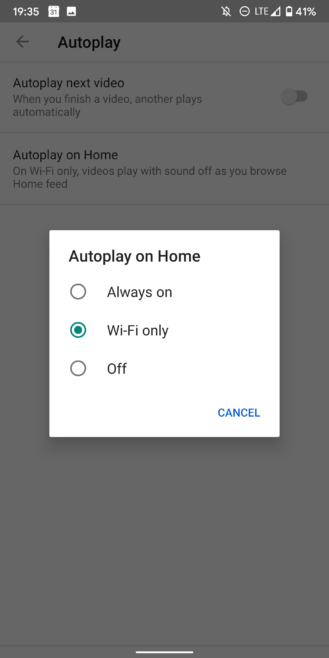 Left: "Autoplay on Home" as we've all known it. Right: In the new test, it's gone.

That's why the option has been taken out of that menu, placed under General, and renamed to a more descriptive Muted playback in feeds. Don't let the allusion to muting confuse you though, there's no volume-related change. The videos always played back as muted and continue to do so; we haven't seen videos play with sound so far, that'd be horrible.

The choices are the same: you can set this to always on, enable it only on Wi-Fi, or disable it altogether. Whew.

If you look closely though, the change in words from "on Home" to "in feeds" means that the automatic video previews now also happen when you scroll through the Subscriptions tab. Good thing you can disable this. My main gripe with it is when you click to watch the video, it resumes from where the preview stopped, meaning you missed the beginning while it was muted. You have to go back and watch it with audio.

Only one tipster has spotted this change on Android with YouTube v14.31.50 (APK Mirror), and we haven't been able to replicate it on a couple of dozens of devices and accounts, so it seems to be limited for now.

YouTube has officially announced this feature. I verified it on my end with YouTube v14.44.52 on Android: Muted playback is available in both Home and Subscriptions tabs and can be disabled by turning off the "Muted playback in feeds" setting under "General." You can also choose to only allow it on Wi-Fi or keep it always on if you like it.

(Update: Winners) Win one of 26 Xcentz USB/QuickCharge wall chargers, or buy one for $5 off [US]