If you've found yourself unable to tap on Chrome permission popups on Android 10, like when websites ask to use your location, you're not alone. As it turns out, system overlays like Facebook Messenger's chat heads or Pokémon Go stats apps are the culprit. Android 10 blocks tapping Chrome popups for security reasons when an app is drawing over the screen because there's always the possibility that some malware is showing fake dialogs on top of the ones actually displayed. 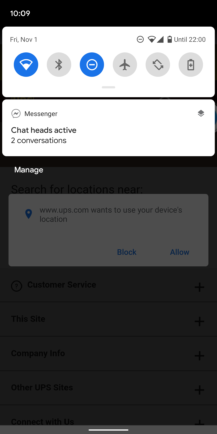 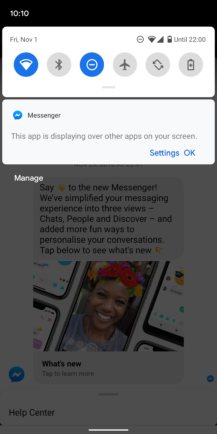 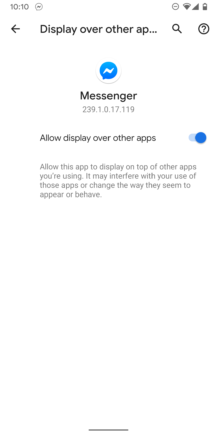 Left: Tap the little overlay button in the top right of the Messenger notification. Middle: Head to Settings. Right: Choose whether or not you want to allow the app to display overlays.

To get the buttons working again, you simply need to remove any currently active overlay, for example, by swiping away Facebook Messenger chat heads. You can also outright disable overlays for a specific app by looking for a notification from it with a little two-layer icon in the top right corner. Tap that icon and then head to Settings. In there, you can toggle overlays on or off. Once deactivated, no matter which way, you should be able to tap the buttons in Chrome's dialogs.

Ever since I got the Pixel 4, I've been unable to tap on any dialogs in Chrome, such as the location dialog.

Doesn't work in Canary either.

While both the unclickable buttons and the complete removal of overlays in Android 10's Go Edition are great tweaks in the name of security, Google hasn't done a good job of informing users what's going on. Android Police founder Artem Russakovskii had quite some digging to do until he realized that he couldn't tap on Chrome's buttons because of his network monitoring app. A simple toast message would've sufficed. With all these restrictions and security concerns surrounding overlays, I wouldn't be surprised if they were kicked from Android altogether in the future.