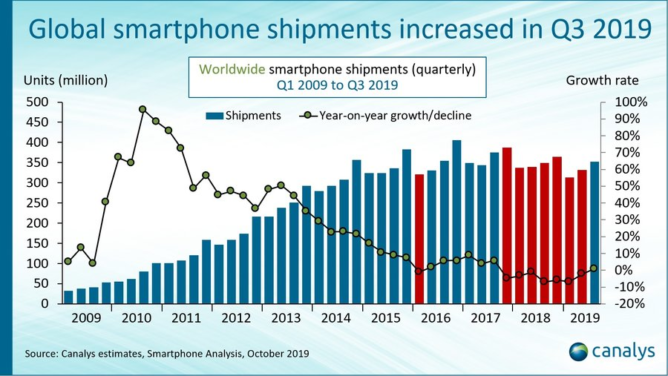 Market share leader Samsung shipped 11% more smartphones than it did in the same quarter from last year, and finished Q3 2019 with a volume of 78.9 million devices shipped, increasing its global market share from 20.4% in Q3 2018 to 22.4% in Q3 2019. According to Canalys, Samsung's growth came about as a result of two changes in its strategy: sacrificing profit in pursuit of market share by pushing out better price-to-spec midrange smartphones (e.g., Galaxy A series), and increasing the number of its high-end smartphone models (e.g., Galaxy S10, Note 10, 5G models). Samsung's strategies have seemingly paid off, boosting the profitability of its mobile division when compared to the same period from last year. 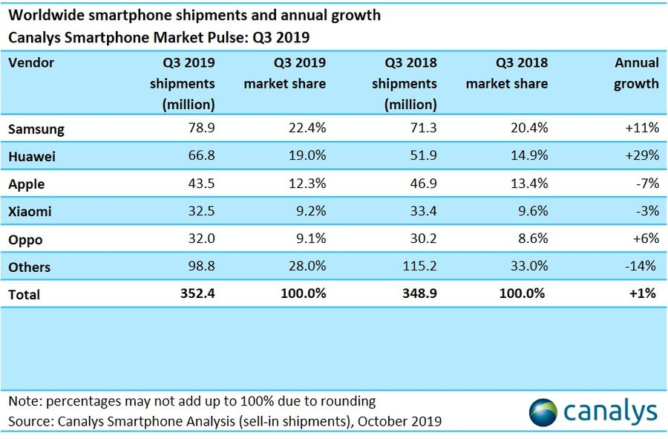 Huawei, who maintains its second-place spot behind Samsung, managed even more impressive growth in Q3 2019. It shipped 66.8 million devices, up 29% from Q3 2018. This resulted in Huawei growing its market share from 14.9% in Q3 2018 to 19.0% in Q3 2019. This is all the more impressive considering it was placed on the US Entity List in Q2 2019 and is restricted from installing Google Mobile Services in its overseas phones. Canalys cautions, however, that Huawei is not out of the woods yet. Most of its impressive growth came from within China, where it experienced a 66% growth at the expense of its local competitors, while its growth in overseas markets wasn't as significant. Also, Huawei's Y- and P-series phones, typically big sellers, will be especially vulnerable when the next models are expected to launch in 2020 — overseas markets are unlikely to buy them without Google's GMS certification.

As for Apple, its market share fell to 12.3% in Q3 2019 from 13.4% in Q3 2018. Despite the release of three new iPhone models in Q3 2019, Apple was only able to move 43.5 million units during the quarter compared to 46.9 million from the same period last year. Canalys attributes this decline to the weak performance of the iPhone XR, iPhone XS, and iPhone XS Max, as well as consumers possibly holding back from buying iPhones due to the lack of 5G functionality.

Xiaomi and Oppo experienced only minor changes year-to-year for the same quarter. Xiaomi had a -3% decline in smartphone shipments to end Q3 2019 with a 9.2% market share. Oppo, on the other hand, managed a 6% uptick in volume to finish with a market share of 9.1%.

Here's how to enable RCS in the Messages app yourself right now (Update: Carrier-specific servers)

Grab Anker's latest pocket projector, the Nebula Apollo, for $329 ($71 off) with this coupon