The YouTube app is constantly under construction with Google changing up little things here and there all the time. The comment section in particular has come under scrutiny this year, with Google even hiding it behind a button during a test this June. The latest experiment in turn makes comments more visible. YouTube is putting the section right below the video description for some as part of an A/B test.

The new comment section has been moved up. Instead of having to scroll down past the Up next suggestions, you'll find it right below the video. When you tap on any of the three featured comments, you'll see the full section and an option to join the discussion. If you scroll to the end of the Up next section in the new interface, a little note tells you that the content has moved to the top. 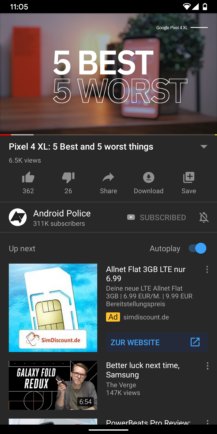 Left: The current interface. Middle: Comment section right below the description. Right: Note that the comment section has moved.

Google says the comments that show up among the three featured ones are determined by factors such as recency or whether they're pinned by the video maker, though there are some pitfalls for creators. YouTube will only show pinned comments with less than 140 characters that don't contain links and don't appear to be self-promotional. Those that don't meet the criteria will still show up as the first post when you expand the comment section.

YouTube is currently testing the update with a small percentage of people and the design may change over time depending on feedback, so none of this is carved in stone. There's no way to manually sign up for the redesign, but it might help using the most recent version, available over at APK Mirror if you haven't gotten it via the Play Store already.