In addition to the upgraded SoC and port, the new Fire HD 10 tablets are powered by Android Pie, which Amazon brands as Fire OS 7. This may seem outdated given Android 10 is out, but it's a significant improvement compared to other Amazon tablets that are still running Android 7.0 Nougat. The updated version is also said to be 30% faster than the previous one while selling for the same price.

In terms of components, the Fire HD 10 offers a 10.1-inch 1080p display, 32 or 64GB of storage, 2GB of RAM, and two 2MP front and rear-facing cameras. Thankfully, there's still a 3.5mm jack, which can be particularly convenient if you want to watch your favorite show during your flight. The all-new edition comes in revised colors, namely black, plum, blue, and white. If you'd rather go ad-free and get yours "without special offers," you'll have to pay an extra $15 and stick with black, which is rather odd as this is only a software limitation. More surprisingly, the edition with no ads won't ship before November 7, which makes it seem like Amazon really wants people to buy the commercially-supported product. Lastly, if you need more storage, there's a 64GB version available for an extra $40, which may not make a lot of sense since there's a built-in MicroSD slot. 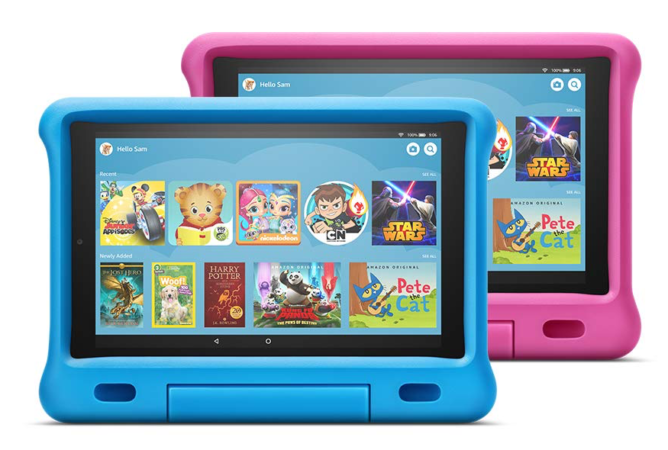 If you're looking for a tablet to entertain your children, there's also a Kids Edition, which includes a shock-proof case, a two-year worry-free guarantee, and a one-year Amazon FreeTime Unlimited subscription. For only $50 more compared to the regular version, this bundle lets you return your tablet to Amazon for free replacements during two years if it breaks, and grants you access to more than 20,000 apps, games, books, videos, and other child-friendly content for a year. Also, if you buy two Kids Edition tablets together, you'll pay just $350 for both, which is $50 less than buying them separately.

Nvidia Shield TV (2019) review: The best Android TV box for pretty much everyone