If you weren't that aware of Realme up to now, it's about time to start taking notice. The Chinese brand is part of the BBK family that also includes OnePlus, Oppo, and Vivo, and it recently made a big push to start selling phones in Europe with the announcement of its latest phones in Madrid earlier this month. And even before we really see the fruits of this expansion, Realme is up to 7th in global smartphone shipments, making it the fastest-growing brand around.

According to research by Counterpoint, Realme sold more than 10 million phones in the third quarter of 2019, which is a staggering year-over-year increase of 808%. It's worth noting that the Realme brand has only been operating for around 18 months, so large growth figures are not wholly unexpected. As well as selling its products in China and Southeast Asia, it's now moved into markets such as Russia, India, and Europe, so there's no reason to think this strong performance is going to slow down anytime soon. 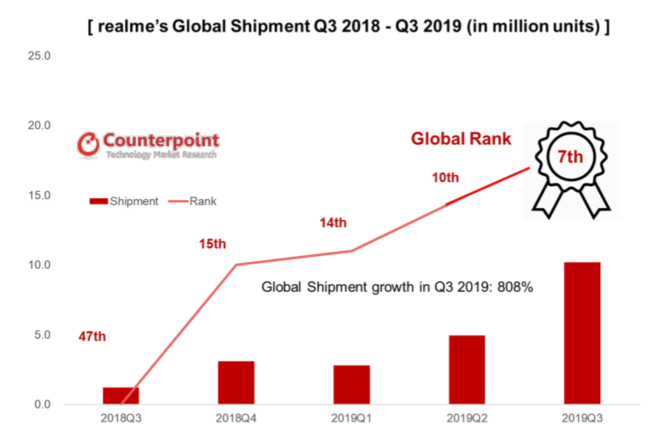 After starting out as an Oppo sub-brand, much like Redmi was to Xiaomi, Realme has broken out on its own (in terms of marketing, at least) and now offers a bonafide flagship in the form of the X2 Pro. Like many Chinese phone makers, Realme is able to offer top-tier specs for an obscenely low price. With a Snapdragon 855+, a 90Hz display, 50W charging, and a quad-camera setup (consisting of this a 64MP main snapper, 5x telephoto, ultra-wide, and depth sensor) for just €399, it probably represents the bang per buck of any handset currently on the market. When David took a look at the Realme X back in May, he called it "the most powerful budget smartphone" he'd ever used.

No other phone maker has made it into the top 10 faster, but it doesn't look like Realme is going to celebrate too soon. The company has plenty more products in the pipeline, from 5G smartphones to wearables and IoT devices — we're going to see a lot more of Realme in the months and years to come.

2019, 28th of October, Smartphone brand realme announces that realme ranks the 7th according to the statistics of global smartphone shipments of realme in Q3 of 2019 from Counterpoint. It is the first time that realme becomes top 7 mobile phone brands after being top 10 in Q2 of 2019. More importantly, the total shipments of Q3 are more than 10 million and the year over year growth of realme reaches to 808% which ranks 1st among the world making it the fastest growing smartphone brand.

It is because of the “Dare to Leap” brand concept which realme has always insisted that realme accomplishes such a surprising results as a 18-month-established young brand when the global smartphone shipments are constantly decreasing, additionally, the “Dare to Leap” strength of realme products also plays an important role.

In October, 2019, realme announces that its global users has exceeded 17 million and officially becomes the mainstream global mobile phone brand. At present, the whole product portfolio of realme has entered European market as the flagship product is introduced in overseas high-end market which is the goal of realme’s globalization strategy. At this point, realme has entered over 20 markets including China, Southeast Asia, Russia, India, Europe and so on, meanwhile, it has made great results in many new large-scale markets.

Plan on The Complete Product Portfolio

The “Dare to Leap” brand concept and the whole outstanding products has played a significant part in realme doing such a brilliant job during short period of time. realme officially makes the whole product portfolio covering entry-level products to flagship in the whole global markets after launching realme X2 Pro and brings surprising “Dare to Leap” products to customers in every price.

At the same time, as a new brand, the young realme invites the global industrial design giant Naoto Fukasawa to become the Invited Design Director of realme. realme and Naoto has corporate with each other to bring many realme Master Edition products to inspire smartphone industrial design and the Master Edition has made great reputation among customers who have more demands.

Earlier in September this year, Qualcomm Corporation officially launched Snapdragon 7 Series 5G mobile platform, realme announced that it would become one of the terminal manufacturers which are going to be shipped with Qualcomm integrated 5G mobile platform firstly. The whole new Snapdragon 7 Series 5G mobile platform will make new realme products more powerful and bring better experiences to users. Besides, realme also makes great effort in IoT field, it tries to research on Wearable Device, AR/VR, Cloud Game, Internet of things and other aspects and explore new products from the IoT angle of the whole 5G Ecology to find more application scenarios.

realme devotes itself to enhancing the speed of 5G’s globalized dissemination and utilize the whole global markets to bring the improved 5G exploring experiences and terminal products to new markets and help with the local manufacturers 5G testing infrastructure to establish 5G internet and step into 5G age more quickly.

realme has landed a record of “The World’s Fastest Mobile Phone Brand Becoming Top 10”, now it becomes the world’s fastest growing smartphone brand ranking the 7th which shows the magnificent strength of the brand. The “Dare to Leap” brand concept and products are the spirit of realme. Hopefully, realme will bring us more miracles in the future.

Google explains how much faster the Sharesheet is in Android 10