One of the worst features in Android for a few years now has been the Sharesheet, the UI that pops up when you hit the share button in an app. In trying to offer you the most convenient and contextual sharing options every time it loads, the menu became incredibly slow and would infuriatingly update as you were about to make a selection. Google made some changes in Android 10 that have resulted in a better, faster sharing experience.

In a talk at the Android Dev Summit 2019 (below), product manager Atur Tsurkan walked us through what his team has done to improve the Sharesheet. The first thing was to simplify the interface visually, so it's now clearer exactly what you're sharing. The copy button has also been moved to the top for easy access. In the interest of speed, the suggested contacts are now preloaded based on previous behavior and a new Sharing Shortcuts API, so the Sharesheet is able to appear much faster. In Google's testing, by 30ms after hitting share, around 50% of Android 10 users will see a fully loaded Sharesheet — in Android 9 Pie, this would only be the case for 9% of users. By about 100ms, all Android 10 users should have their sharing UI ready to go, while it's still only around 50% for Android 9. 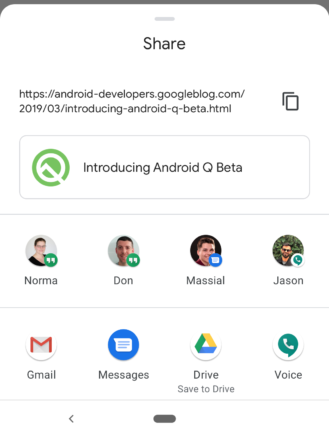 There's also a new API for people shortcuts — the direct sharing links to contacts via certain apps — that developers are being encouraged to use. Below are four suggested apps for sharing, and if you scroll past those you'll see an alphabetical list of all the other possible share targets. A previous change already made it harder for devs to game this system and get their app higher up the list.

Improving the Sharesheet is one thing, but now Google has to make sure apps are implementing it correctly. It was so bad in Pie and Oreo that some developers abandoned it in favor of a custom solution, and this includes some of Google's own apps such as YouTube, Maps, Photos, and News. The one YouTube uses underwent a slight change recently, but it's now time to make the experience more consistent across Android's core apps — come on Google, get your ducks in a row.