Google Contacts is among the more popular contacts app, even on phones with preinstalled OEM alternatives, mainly for its clean look. The app got a dark mode much before it became a fad, and received the account switching gesture recently. That “clean look” part, however, may be up for a change as the company is now testing a redesign that seemingly clutters the contacts editing page. 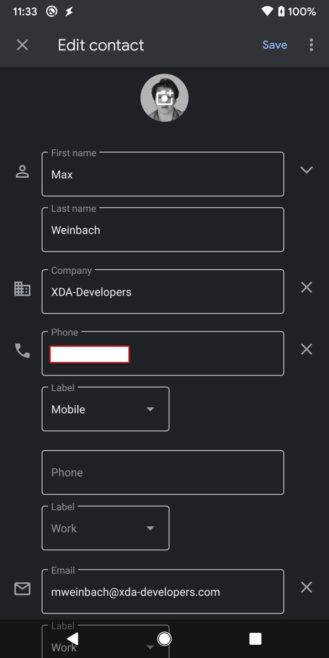 Mishaal Rahman of XDA-Developers recently tweeted a screenshot of the app’s redesigned contact editor. As part of this test, each field now has an outline to highlight the text box, replacing the orderly underlines that are more commonly seen at present. Adding to this clutter are the persistent field titles pulling off a one-eighty from the current subdued labels that go away from the selected field. These changes aren’t permanent yet, and Google may choose to withdraw them while in the testing phase — I seriously hope they do.

This redesign has so far appeared only in version 3.11 of Google Contacts, but getting the app version won’t guarantee these boxier elements. It appears to be a server-side update that’s being pushed to select users. V3.11 is already live on APK Mirror while a wider availability via the Play Store may take some more time.

26 new Android games from the week of October 21: The King of Fighters ALLSTAR, ROME: Total War ...