No one wants to go broke while upgrading their house to become a smart home, and that's a big part of what's made Wyze hardware so appealing: straightforward functionality at a just-can't-be-beat price. Following the launch of Wyze Sense security sensors and the Wyze Bulb earlier this year, the company's smart home offerings are now joined by a solution for controlling existing appliances: the Wyze Plug.

In theory, a smart plug should be one of the simplest smart home devices you'll come across — just an outlet that can be turned on and off via software. Does the Wyze Plug get that job done, do it at a competitive price, and maybe even tempt us with a little extra functionality? Let's take a look.

Wyze hardware definitely has a design language of its own, and the Wyze Plug fits right into that mold: compact, white, and lots of straight, clean lines. The Plugs are shaped a bit like an adapter that would split one outlet into three, with a wide, horizontal layout. But instead, we get just a single, three-prong outlet we're able to remotely control. 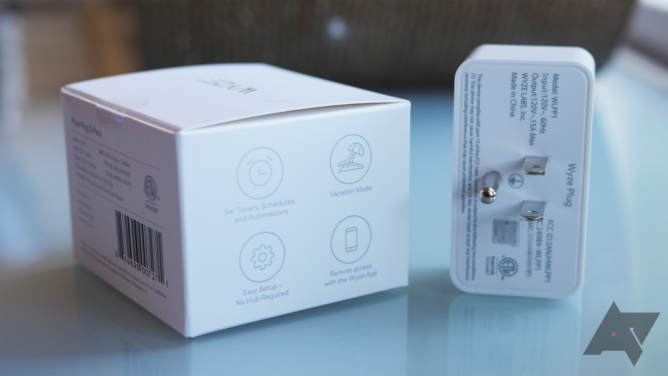 The actual layout of the Plug is positively spartan: prongs around back, outlet up front, and a recessed button on the left side for manually operating the Plug without the Wyze app. A tiny blue LED is used to indicate power status, though that can be disabled in software if you choose.

The shape used for the Wyze Plug makes it easy to work with multiple units connected to the same outlet — at just 2 inches tall, they're small enough that one won't get in the way of another when stacked top-to-bottom. On the flip side, though, this also means that the Plugs will block adjacent outlets when used in certain power strips. Considering its options, I think Wyze made the right call here.

Wyze sells the Plug by the 2-pack, but don't expect much in the way of accessories — the smart plugs ship boxed with a small quick-start guide, but that's it. Really, though, you don't need anything else. 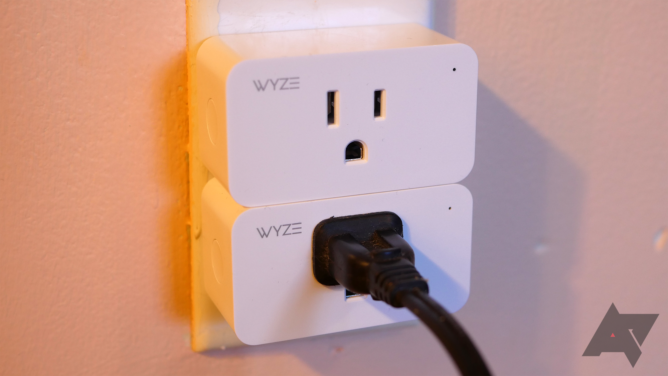 Pairing the Wyze Plug with the company's app should be a simple process. You get started by holding the power button on the Plug's side (not unlike you might for BT pairing a headset) and telling the app you wish to add a Plug. Then it's just a matter of confirming your Wi-Fi credentials (2.4GHz only) and briefly connecting to the Plug's internal AP. Assuming all goes well, you'll be able to name your Plug and begin controlling it a moment later.

In practice, I found setup a bit hit-and-miss. Not needing a dedicated Wyze hub is a real benefit, but the Wi-Fi setup process can be a little opaque, and with one of my Plugs I had to try several times to get the final step to complete successfully — ultimately using both a different outlet and phone. 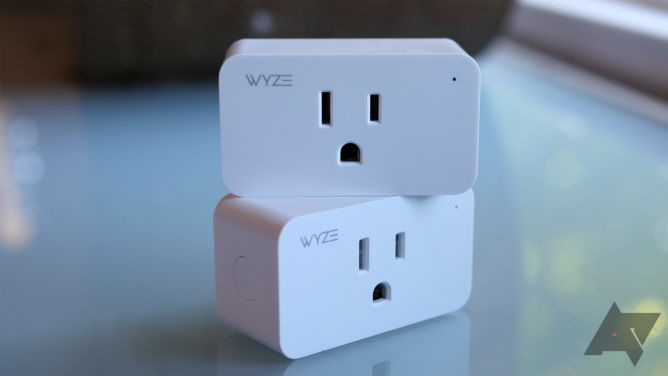 When in operation, the Wyze Plug delivers a satisfying “click” while powering on or off — the clear indication of a relay-operated device. Going this way allows the Plug to handle loads of up to 15A — something a solid-state system would struggle with, or risk getting very hot. That means you can use it with some more robust appliances than the Plug's less-beefy competition. The clicks are decently loud, and while I imagine some users would strongly prefer them not to be, I can also appreciate the nice audio confirmation that your switch is working.

One critical thing to keep in mind with any kind of smart outlet is what kind of appliances will actually work with it. Beyond the 15A max current, you also have to ask yourself, “Is this a product I can operate by simply plugging it in and out?” If you have to press any buttons on the appliance after powering on (or god forbid, use a touchscreen), you're probably out of luck. For instance, a simple coffee maker with a physical on-off toggle should work (left in the “on” position and using the Wyze Plug to control power), but a fancier one with lots of momentary buttons for choosing brew options might not.

Once set up, you can start toggling your Plug on and off through the Wyze app, or go ahead and create some custom Rules — those will let you actuate multiple Plugs at once, set up a time-based routine, or go with something trigger-driven. For the latter, you can use motion or sound events from Wyze cameras, or work with any of the Wyze Sense sensors, to turn on or off Plugs at your convenience.

Configuring Rules, setting a timer, and preparing for Vacation Mode

We also get some Plug-specific controls, like a one-use timer to trigger the Plug after a set time period (up to one day). And if you always thought that outlet timers for when you're away from home were a bit obvious in their rigid operation, the Wyze software offers a Vacation Mode that integrates randomness into things, turning on and off devices at more natural-appearing intervals.

Like other Wyze products, you're able to share control of Plugs with other users you choose to authorize. The app offers some basic analytics, displaying hour-by-hour usage throughout the day, as well as week-long trends.

Of course, this wouldn't be a proper smart home product if we didn't have some integration with other systems, and Wyze Plugs support control via the Google Assistant, Alexa, and IFTTT. I spent some time creating Routines involving the Plugs in Assistant, and Wyze's devices functioned flawlessly.

Yes. Priced as a two-pack for $15, the Wyze Plug is very competitive — you'd be hard-pressed to pick up a single outlet at that price from many of its peers, or find yourself limited to 10A support. Like a lot of Wyze products, software can be a little finicky at times, but once you have your Plugs configured and running, most of those issues will be in the rear view mirror. In the end, it does what it sets out to do, and does so quite affordably.

Spotify will soon let artists pay to send you notifications