The Five Nights at Freddy’s series exists as a group of horror-themed video games packed with jump scares, and it's rather popular with younger audiences. Since today is Friday the 13th, it makes sense that Illumix just announced that it's bringing the FNaF franchise to the real world with Five Nights at Freddy’s AR: Special Delivery. This will be an augmented reality release designed to bring new audio and visual gameplay experiences to the series, and you can pre-register for the title on the official FNaF AR website.

If you check out the trailer above for Five Nights at Freddy's AR: Special Delivery, you should get a good idea of the scares expected from the title. Of course, the first thing I noticed is how good the trailer looks, though there's no way to know for sure if what's shown is a cinematic or actual gameplay. At the very least, this trailer has indeed piqued my interest.

Details are rather light, so we don't know how the game will be monetized or when it will actually arrive on the Play Store. We do know that augmented reality is a core aspect of the title, and today's PR clearly states that AR will be used to evolve the game "beyond the traditional AR-optional geolocation gameplay" to "deliver a more meaningful AR experience." While this is yet to be proven, it sure sounds promising. 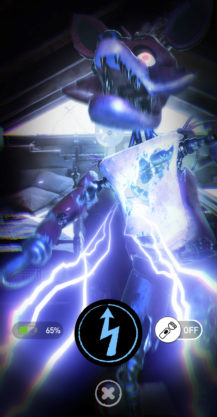 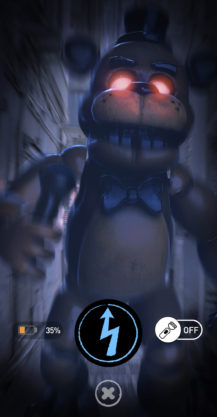 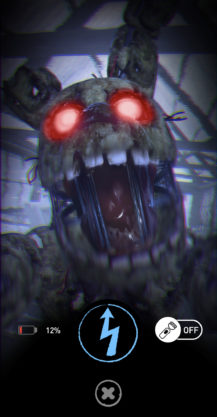 While it would have been nice to see the monetization and release date announced today for the upcoming arrival of Five Nights at Freddy's AR: Special Delivery, I suppose trickling out info for forthcoming games is just something us gamers have to deal with. Hopefully, more details will come to light as development for this title advances, so if you'd like to receive updates about the game and gain exclusive access to the first FNaF AR Snapchat lens, you'll want to pre-register on the official FNaF AR website.

Five Nights at Freddy’s AR: Special Delivery for Mobile to Deliver a New Kind of AR Experience, Bringing the FNaF Franchise to Your Reality

Redwood City, Calif. - September 13, 2019 - Illumix, an integrated gaming and technology company that is transforming the future of mixed reality games, is shaking things up this Friday the 13th by announcing Five Nights at Freddy’s AR: Special Delivery. This Fall, fans of one of today’s most popular and iconic horror properties will be treated to a completely new audio and visual gameplay experience, as the Five Nights at Freddy’s franchise will be set in Augmented Reality for the first time ever. Currently in development, Five Nights at Freddy’s AR: Special Delivery will allow players to get their favorite animatronics on demand and bring them to life in their real world through an AR survival horror game never before seen, via iOS and Android devices.

Recently, the creator of Five Nights at Freddy’s, Scott Cawthon, came out of his public hiatus to announce what was in the works for the fan-favorite franchise on his Steam page. Illumix anonymously dropped a teaser last week setting the community ablaze with predictions, rumors, and anticipation for the new AR game. Today, Illumix is officially coming out as the studio behind the FNaF AR game mentioned by Cawthon and is opening pre-registration for Five Nights at Freddy’s AR: Special Delivery.

“Augmented Reality offers new ways for players to interact and engage with their favorite franchises by blending real-world environments, fictional characters, and innovative gameplay,” said Kirin Sinha, CEO and Founder of Illumix. “With Five Nights at Fredddy's AR: Special Delivery, we wanted to evolve beyond the traditional AR-optional geolocation gameplay and deliver a more meaningful AR experience by having AR as the core component of the game.”

Illumix made headlines in 2018 when they came out of stealth mode and were funded by top Silicon Valley VC investors to build AR games supported through best-in-class gaming practices and advanced AR technology. They are realizing their unique vision of the future of AR gaming by merging the fictional universe of Five Nights at Freddy’s with players’ real-time and everyday world - at home, school, work, or anywhere they choose to go.

Fans of Five Nights at Freddy’s have viewed video content, covering the PC games, mobile ports, and more recent VR experience, over eight billion times. They have downloaded the various games over 100 million times and will be getting a FNaF feature film, which is currently in the works. Five Nights at Freddy’s AR: Special Delivery will bring a whole new dimension to the franchise via mobile devices later this year. For those wanting to be among the first to get their special delivery, pre-registration is now open via https://www.fnafar.com.

Click the Image to View the Official Announcement Trailer on YouTube
About Illumix:
An integrated gaming and technology company, Illumix’s goal is to transform the future of mixed reality with environmentally-intelligent, world-scale AR games. Illumix has raised approximately $10 million to build augmented reality games, from top venture capitalists, including Maveron and Lightspeed. They aim to make more meaningful AR games, not novelties or companion experiences, by focusing on building powerful user experiences that drive their core technology.

Last month it was revealed that Five Nights at Freddy's AR: Special Delivery would be coming to Android. Today it has been announced that this is the first FNaF game designed specifically for mobile devices, and it will enter into early-access before Thanksgiving 2019, with the official launch following shortly after that. Admittance to this early-access phase will be granted on a first-come, first-serve basis. Anyone that pre-registers for the title will have a chance to be granted this access and those that obtain an Early Access Ticket will also receive a limited number of invitations for friends and family. So if you'd like to pre-register to see if you can get into the upcoming early-access phase for Five Nights at Freddy's AR: Special Delivery, you'll have to do so on the official FNaF website.

Illumix is revealing more information about the highly anticipated Five Nights at Freddy’s AR: Special Delivery -- the next installment in one of today’s most popular and iconic horror properties. Illumix first announced the title in September, sending waves of excitement through the fanbase with the idea of characters from the fan-favorite franchise coming to life.

Today, Illumix is announcing that Five Nights at Freddy’s AR: Special Delivery will be the first free-to-play game in the franchise. It is the first FNAF game designed specifically for mobile gaming, as opposed to being a mobile port of the previous PC games. Illumix will continue to update the title with new content and features during live operations, and will be taking into account community feedback on an ongoing basis. Illumix CEO Kirin Sinha says: “Illumix is committed to creating innovative AR content that is accessible to everyone. Our DNA is in community gaming, and we are excited to begin working directly with the fans to evolve our first title through our Early Access program.”

So how do you get a chance to play the game early and get involved?

Pre-register at FNAFAR.com for a chance to receive an Early Access Ticket to the game. Those who are granted tickets will be the first to experience the game in advance of the official launch on iOS and Android devices.

The upcoming timed Early Access period will take place before Thanksgiving 2019 with the official launch to follow.
Early Access will be granted in batches on a first come, first served basis. Anyone that has pre-registered will have a chance to be granted access.
Players with an Early Access Ticket will also receive a limited number of invitations so that they can play the game with their friends.

For those wanting to be among the first to check out the game, pre-registration is now open via http://www.fnafar.com.

Embargo for the news and assets is set for Thursday, October 24, 2019 at 6:00 a.m.
About Illumix:
An integrated gaming and technology company, Illumix’s goal is to transform the future of mixed reality with environmentally-intelligent, world-scale AR games. Illumix has raised approximately $10 million to build augmented reality games, from top venture capitalists, including Maveron and Lightspeed. They aim to make more meaningful AR games, not novelties or companion experiences, by focusing on building powerful user experiences that drive their core technology.

[Update: Out now] The Swords of Ditto is a Zelda-inspired action RPG now up for ...