Starting with the Pixel 2 from 2017, Google has been embedding an eSIM into all of its Pixel phones. Although eSIM has been touted for its many virtues — changing one's carrier remotely without a physical SIM card and enablement of the dual-SIM dual-standby feature — its adoption rate from US carriers has been very slow and limited to select devices. After skipping over the Pixel 3 phones last year, AT&T has added the Pixel 4 to the list of supported eSIM devices.

When our Artem recently ran his Pixel 3 through the activation process on AT&T, the eSIM option was still missing. It's probably safe to say that the Pixel 3s won't ever be added, considering they weren't officially sold by AT&T last year. 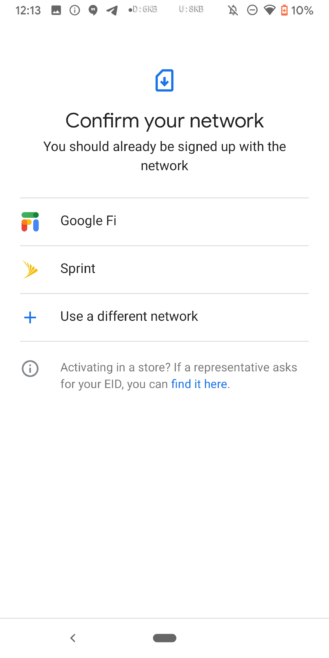 On Artem's Pixel 4 XL, however, the option to activate the phone via an AT&T eSIM was present.

The fact that AT&T is including the Pixel 4s for eSIM activatation this time around is not very surprising — after holding out last year, it is now one of the launch partners for the device. Does this mean that the Pixel 4 will also get its dual-SIM dual-standby feature activated in the future as on some iPhone models? We certainly hope so. If you run into any issues activating your Pixel 4 on AT&T, then head over to its support site for assistance.

AT&T clarified to us that it supports eSIM on Pixel 4, but not the Pixel 3. To use the feature, you need the QR code, which you still need to get, along with the SIM, from AT&T's physical retail stores.