Treble debuted as part of Android 8.0 Oreo, all the way back in 2017. Google understood that it would take a long time for the new feature to make an impact — only new devices would support it, and a change in yearly updates would take, well, years to measure. Google considered the uptick in OEM and device support for its Android beta program an early indicator of success, but more recent metrics show even more substantial and measurable differences. 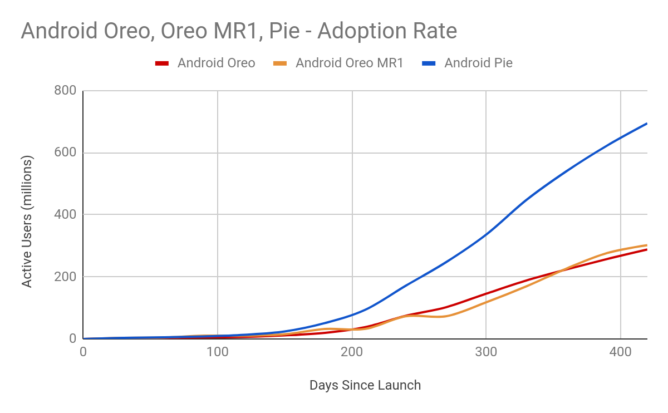 Adoption rates for Android Oreo compared to Pie, measured relative to a given version's launch date.

Based on the graph above, the rate of adoption for Android Pie has been over twice that of Android Oreo. Since OEMs updating to Oreo didn't have the benefit of Treble support (remember, it was only released together with Oreo, so it was mostly limited to new devices), and since smartphone sales are generally in decline, we can probably assume that the difference between the two versions across time comes down to updates, and therefore Treble. Still, it'd be nice if Google could go back to publishing these platform numbers separately again so we can double-check the math.

Backporting Treble to the original 2016 Pixel may even be part of why it got updated to Android 10, though it was only promised two years of major version Android updates; Treble just makes the process a whole lot easier.

By the numbers, Treble is clearly making a difference, but it isn't the only reason the speed of updates is increasing. Google has also been collaborating with chipset manufacturers like Qualcomm and MediaTek to speed up how quickly OEMs can get their hands on the system-level software required to deliver the updates.

Google doesn't have graphs or numbers to back up all of its claims, but the company thinks that updates to the latest Android 10 are going even more smoothly, despite the fact that we're only a few months from the formal, stable launch. Early indicators, like Samsung's faster release of the One UI beta this year and new third-party hardware like the OnePlus 7T already shipping with Android 10, would tend to support that argument. Mix in the system-level updates that can now be delivered via Project Mainline separately from operating system updates, and Android's fragmentation problem — which probably can't ever be fully solved — will matter even less in practical terms once more devices support it.

Earlier this year, Google told us there were over 2.5 billion Android devices out there. That huge number is the result of such varied hardware, supported by so many different OEMs, it's no surprise they aren't all running the latest version of Android. But thanks to Project Treble, more of them are every day.