Google's Pixels come with some pretty snazzy "live" wallpapers that respond with parallax and motion effects to your touch and phone orientation, and the aptly-named application that controls these live wallpapers on the Pixel 4, called Pixel Live Wallpaper, has just appeared on the Play Store. Unfortunately for folks hoping to emulate the Pixel experience, this official app is for Pixel 4 and 4 XL only. 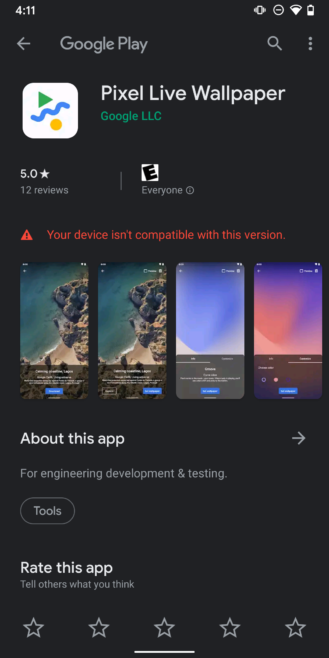 The new listing should mean that Google can deliver updates to its live wallpapers independently of system updates, which means any future fixes, features, or new live wallpapers can be more easily rolled out without waiting on monthly updates. It is possible compatibility for the app could also expand in the future to support other phones (like older Pixels, maybe?), though it currently appears to be limited to the Pixel 4. Note that the listing for the app may not even appear on your account if you don't have a compatible device.

The initial release of the app to the Play Store is also prompting an update for Pixel 4 owners, though we aren't sure if there are any new features present in this version. A quick glance doesn't show any differences on our end, but we'll let you know if that changes.

Non-Pixel 4 owners shouldn't fret too much. The Live Wallpaper app was previously ported to other phones, and I'm sure any new features or new wallpapers that could potentially debut via an app update can be easily ported as well.