This tale of double standards was first told earlier today by TechCrunch and includes details provided by the independent developers of the Fleksy keyboard. Apparently, an update to the app was blocked by Google without any explanation, though the developers were repeatedly issued a self-questionnaire for determining an app rating several times before their update was denied. Following an exchange with developer support, Google finally explained that the app update was being held because "the content rating is not accurate for your app," and "we found that your app contains content (e.g. emoji) that is not appropriate for all ages."

The emoji in question is the middle-finger emoji, standard to most operating systems and pictured again just below:

To ultimately approve and deliver their update (a simple matter of bugfixes), the developers were required to raise their app's rating to PEGI 12/Teen. Worse, Google's reps want the developers to push that rating even higher, to PEGI 16, an effective "Mature" rating, a requirement imposed on almost no other keyboard in the Play Store.

These actions and demands on the part of Google's Play Store representatives reek of hypocrisy, in no small part because Google's own keyboard has access to the same middle finger emoji and manages to squeak by silently with a much lower rating. Even the widely used Swiftkey software keyboard has the middle finger in the emoji section of its keyboard, and yet Google's draconian support reps appear to have only targeted Fleksy in isolation. 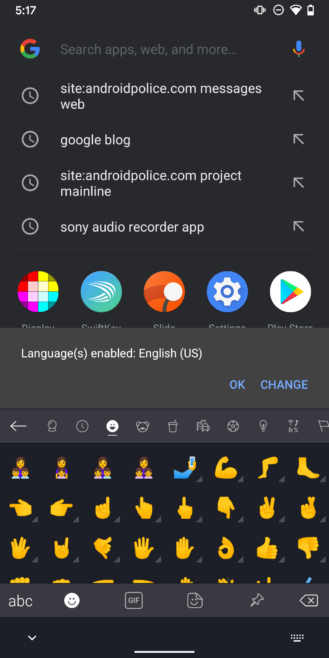 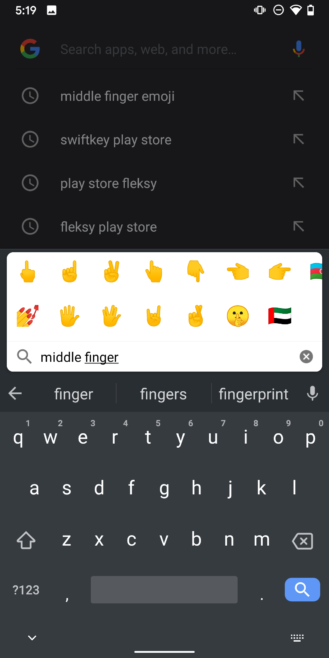 Fleksy is developed by Spain-based startup ThingThing, and CEO Oliver Plante accuses Google in no uncertain terms of anti-competitive behavior, telling TechCrunch, "we’re all-in for competition, it’s healthy… but incumbent players like Google playing it unfair, making their keyboard 3+ with identical emojis, is another showcase of abuse of power." He later added, "I suspect someone is doubling down on competitive keyboards over there as they lost quite some grip of their search business via the alternative browsers in Europe…. Perhaps there is a correlation?"

A Google spokesperson reached by TechCrunch even noted that "the situation looks odd," though a formal statement or response has yet to be issued. There's a decent chance this could just have been the result of one rogue group of app reviewers at the Play Store on a misguided power trip, but either way, it's both wildly hypocritical and just another indicator of how terrible Google's Play Store support for smaller developers still is.