SanDisk is a purveyor of high-performance, premium microSD cards known for their reliability and compatibility. In fact, its microSD cards are often included in the box with many high-end dashcams, action cameras, and drones — items that require consistent performance and reliability to perform at their best. With today's one-day sale, the Sandisk Extreme 256GB microSD card has dropped down to its lowest price ever of $40.39, available from Amazon.

The SanDisk Extreme 256GB microSD is one very well-specced out card. Its A2 notation means it can perform 4,000 read input-out operations per second (IOPS) and 2,000 write IOPS — great for storing your Android phone's app data for quicker file transfers and data manipulation. The UHS speed class 3 (U3) and video speed class 30 (V30) designations denote a sustained video capture rate of 30 MB/s, suitable for reliable real-time video capture with a drone or an action camera. It's also capable of 160 MB/s of read and 90 MB/s of write rates, resulting in faster speeds when moving files back and forth between devices. With 256GB of storage, it should be a while before you need to clear out any space. 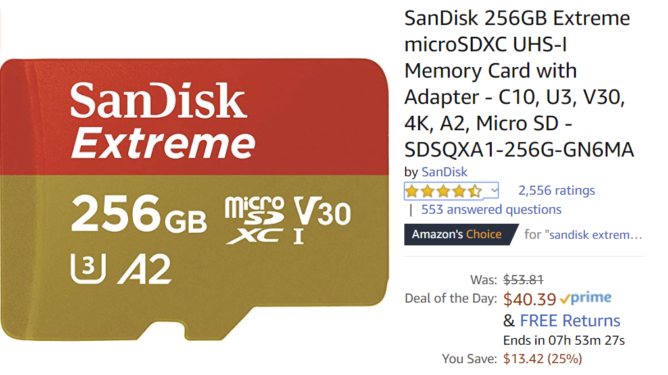 If you've always wanted one of these premium microSD cards for your phone, drone, or action camera, then head over to Amazon right now and get yours before the supply runs out.

[Update: Available for all] Twitter for Android adds OLED-friendly 'lights out' mode in latest alpha