Above, you can watch the teaser trailer for NBA Now, though it's from January, so it may not provide an up-to-date picture of what's expected in today's release. You'd think Gamevil would take the time to publish a full trailer for today's launch, but I guess that's expecting too much from the company.

The gameplay in NBA Now offers precisely what you would expect of a branded NBA release. You'll spend your time building a championship team out of rookies and veterans alike, and will have to upgrade these players as you progress. One-touch controls are included for one-handed play in portrait, which means this is a title best played while on the go, though you can also expect a few extra features that highlight current NBA news and stats as well as a prediction feature where players can guess the outcomes of upcoming games. There's also a PvP mode so that you can take on your friends and family to see who has built the strongest team.

Much like 2K's and EA's mobile sports offerings, NBA Now is a free to play release that contains advertisements as well as in-app purchases, that just so happen to range up to $99.99 per item. So if you were hoping for premium release, think again. 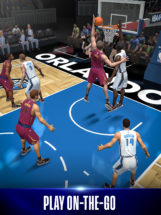 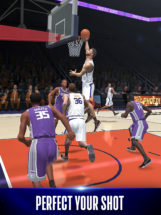 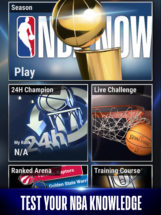 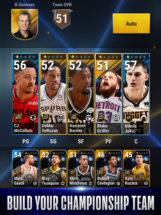 Since the 74th NBA season starts today, I suppose it's solid move on Gamevil's part to release NBA Now while interest is at a fever pitch. While I can't get behind the style of monetization and the insertion of lofty IAPs into such a title, I suppose a little more competition in the mobile sports gaming world is never a bad thing. EA's and 2K's greed clearly knows no bounds, and while NBA Now comes off as more of the same wrapped up in a new package, there could still be room for new features that come about in the wake of this competition. So yeah, if you'd like to give the opposition a look to see how things have turned out, today is clearly the day to do so. LOS ANGELES - October 21, 2019 - Mobile games publisher and developer GAMEVIL today announced the launch of the new basketball game, NBA NOW. The game challenges players to step into the role of general manager to build a customized team with their favorite NBA stars and compete in an NBA season with the goal of winning a championship. NBA NOW is available globally in the Google Play Store and Apple App Store.

Sporting an intuitive vertical-screen one-touch gameplay system with simplistic controls that aims to appeal to a broader audience on mobile, NBA NOW offers a wide variety of game modes and features players, team uniforms and courts, as well as real-time NBA stats that are reflected in player ratings throughout the season.

“Our partnership with the NBA and NBPA allows GAMEVIL to take another huge leap into the mobile sports gaming realm,” said Kyu Lee, President at GAMEVIL COM2US USA. “With simple controls and powerful tools, gamers and NBA fans can build and manage nearly every aspect of their team to set them up for success, and can even take control on the court.”

NBA NOW is the latest in GAMEVIL’s growing library of sports titles, following the company’s long-term partnership with the MLB for its popular baseball title, MLB Perfect Innings. NBA NOW is available in up to 10 different languages including English, Korean, French and Spanish.