Google has slowly been rolling out Continued Conversation across its smart home devices. Assistant-equipped displays have only received the feature that allows you to keep on talking without shouting "OK Google" for every consecutive command in March. It seems like Google is now also preparing to launch Continued Conversation on phones, as evident by a new Phone setting for the feature which some people are receiving via a Google app update.

A tipster reached out to us to show us the new toggle, visible to him in the Assistant settings under the Continued Conversation entry. Google apparently isn't quite ready to launch the option on mobile devices, though. The tipster said he flipped on the Phone toggle, but the Assistant would still stop listening to him after the first command. 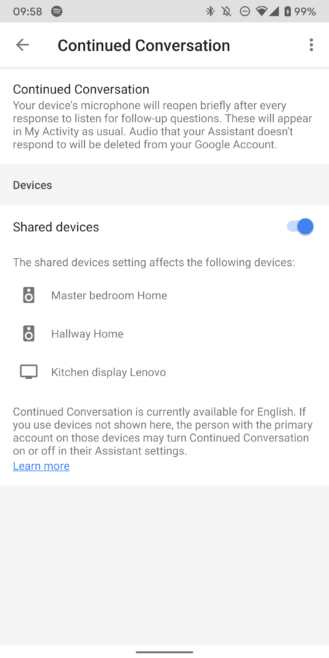 The new entry could be related to the more powerful Assistant experience first coming to the Pixel 4. Since the setting is already live in the Google app for a phone with the older Assistant, the continuous mode might also come to devices that won't support the new version.

The toggle appears to be part of an A/B test, so it can take quite some time until it shows up for you. It might help using the beta version of the Google app, which you can sign up for on the Play Store or download over at APK Mirror.