Razer is mostly known for its RGB-lighting heavy gaming equipment, but the company also already published the second iteration of its Android phone around this time last year, the aptly named Razer Phone 2. With a list price of $800, the device was supposed to be competing with the Pixel 3, OnePlus 7, and others in that range, but the phone's cost has quickly fallen and is now down to just $373 on Amazon.

The Razer Phone 2 sports a glowing multicolor logo on its black glass rear and comes with last year's highest-end hardware, as you'd expect from a gaming device. The pixels on its 5.7-inch 120Hz QHD screen are pushed by a Snapdragon 845 and 8GB of RAM, powered by a 4,000mAh battery. You won't find a good camera on it, though. In our review last year, we wrote that it "doesn’t come close to achieving the rich detail and color vibrancy you see with an excellent camera device like the Pixel 2. The photos tend to come out softer, and there's a tendency toward blowing out light areas of a given scene." 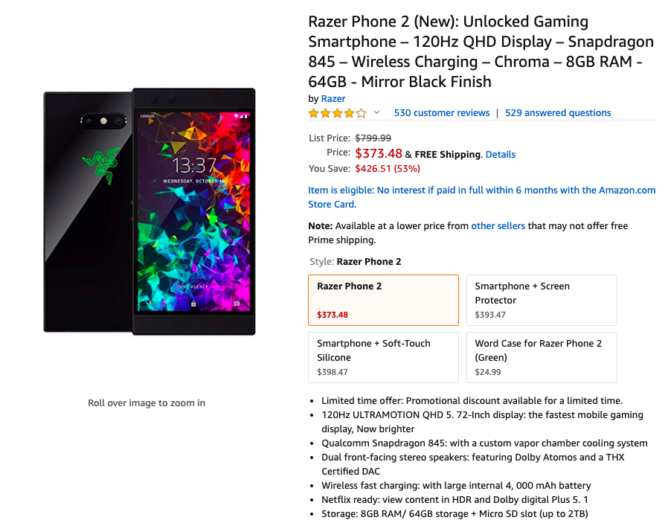 Still, if you're looking for an overall high-end device with a unique screen and aren't put off by blocky design, the Razer Phone 2 should be something to consider, especially at the current price.