Apparently, all one has to do is place a screen protector on top of the display and press down on the sensor area with any finger. According to some Reddit users from the United Kingdom, two UK banking institutions — NatWest and Nationwide Building Society — have already implemented countermeasures intended to protect affected Galaxy users. In the case of NatWest, its banking app was removed from the Play Store for Galaxy S10 owners until Samsung fixes the security issue. 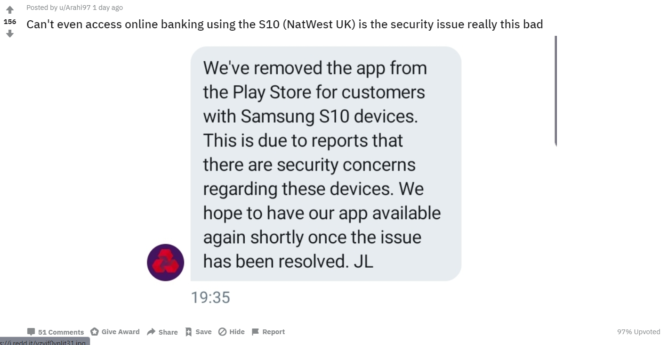 As far as we know, US banks have yet to implement such countermeasures. On my Galaxy S10+, for instance, I'm still able to use the ultrasonic fingerprint sensor to log in to several banking apps, including Chase and PayPal.

According to Samsung, the devices that are vulnerable to this ultrasonic fingerprint sensor bypass method are the Galaxy Note 10, Note 10+, S10, S10+, and S10 5G models. Samsung claims the software update containing the security fix will be released as early as this week and asks its users to rescan their fingerprints afterward.

TWRP adds support for the Snapdragon Galaxy S10 and Note 10 family, plus much more