The desktop environment that turns your Samsung phone or tablet into a PC when connected to an external display, nicknamed 'DeX,' has been around for a while now. Nearly a year ago, Samsung introduced the Linux on DeX beta, which could run a full Linux OS on top of DeX. Sadly, the project seems to have been discontinued.

Samsung is sending out an email to testers explaining that the beta program has ended, and that Linux on DeX will not be supported on devices running Android 10:

Thank you for supporting Linux on DeX Beta. The development of Linux on DeX was all thanks to customer interest and valuable feedback. Unfortunately, we are announcing the end of our beta program, and will no longer provide support on future OS and device releases.

Even though it's disappointing that one of Samsung's more out-of-the-box projects has been shuttered, it doesn't come as much of a surprise. Linux on DeX didn't receive any major improvements throughout its lifespan, besides expanding compatibility to more devices, and the only official system image offered was for Ubuntu 16.04 — a version of Ubuntu Linux released all the way back in 2016 (though will still be supported until 2021). 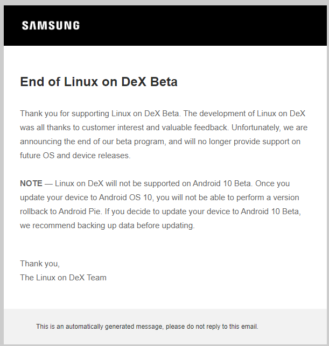 It's impossible to tell exactly how many people used Linux on DeX, considering the Play Store listing was taken down a while ago. The number is likely minuscule, considering the project catered to a niche of a niche — DeX users who also want to use Linux on the go. As of April 2019, the Play Store counted 5,000 installations, and the last update on APKMirror (published in April) is at nearly 36,000 downloads. 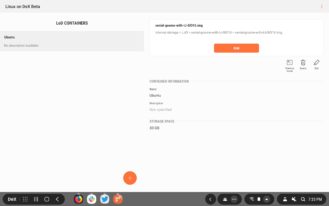 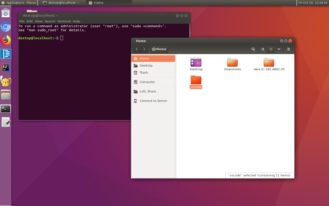 Linux on DeX on a Galaxy Tab S5e

If you have a Samsung device not running Android 10, you can still give Linux on DeX a shot by downloading the app from APKMirror and grabbing the system image from Samsung's website. I'm waiting for the Internet Archive to fix its archival tool so I can backup everything, but in the meantime, I've mirrored the system image on Dropbox.