That gesture navigation prerequisite won't be the only issue preventing some folks from using the next-gen Google Assistant on the Pixel 4. Turns out, it also won't work on the device if you are signed into a G Suite account — not just as your primary account, but at all. That means those of us using a G Suite account on the side for school or the day job will have to use a separate work profile as a workaround for now, though Google tells us it is actively working on a fix.

A pretty ridiculous limitation if you ask me. pic.twitter.com/7MRbRY6Xzh

The issue manifests simply: If you are using a Pixel 4 (small club right now, sorry), then you can't access the new version of the Assistant if a G Suite account is also signed in on the current profile. So that means if you've added a work or secondary account to the phone, and that account is set up through G Suite for things like Gmail, then you won't be able to use the new Assistant until those accounts are removed. Google's support documents even mention the confusing restriction in less precise terms.

There is a workaround, though. If you sign into the new accounts in a separate profile, the old profile will have access to the new version of the Assistant, and you'll still be able to access your G Suite account through the new one — though that will require a significant change in workflow for many, and it works best if your administrator has set up advanced mobile device management for the G Suite account, which furthermore requires a paid G Suite account to work. (In our testing, it worked without a paid account, just potentially not with the same integration a defined work account would have.) 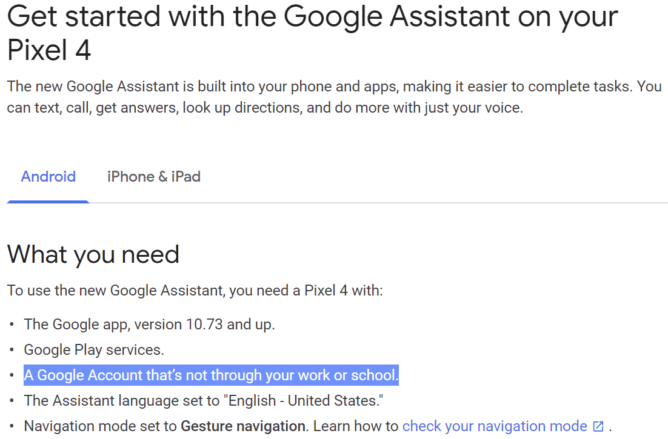 Google's Pixel 4 Assistant support document also mentions the G Suite restriction (in an imprecise way) but it doesn't state that having a G Suite account alongside a standard Google/Gmail account will interfere, though it does.

This also won't be an issue for most folks until the Pixel 4 ships, expected to happen around October 24th, or the next-gen Assistant rolls out more widely. Right now, the new Assistant seems to be a Pixel 4-exclusive feature based on our anecdotal experience, though it may just have not rolled out to our other devices just yet. Google is known for extensively testing these sorts of changes pseudo-randomly. The only concrete reference we know of that makes explicit mention of the Pixel 4 as a requirement is the same support document we mentioned before, and since that help page itself is specific to the phone (and not phrased the best), we can't be sure.

We reached out to Google regarding the G Suite limitation, and the company confirmed the issue. We were told that there isn't a timetable for a fix, though Google is actively working on it, and we were pointed to the profile-based workaround.

In the meantime, millions of folks using G Suite accounts for work or school will have to skip out on the updated Assistant or resort to the inconvenient workaround described above, until the issue is fixed and whenever the new Assistant begins rolling out more widely.