As Google has announced prices, you should expect to pay $799 or $899 for a Pixel 4 and $899 or $999 for an XL size, depending on if you get the 64GB or 128GB option. Keep in mind that the limited edition Oh So Orange so those who want more space will have to stick to Clearly White or Just Black.

(Correction: At time of original publication, no 128GB stock of the Oh So Orange was available for purchase. However, inventory has since been released.)

However, each store or carrier has their own tricks up their sleeve to make sure you're getting Google's phone from them.

As of time of publication, the biggest checkout queues seem to be stacking up at the Google Store.

Shipping dates are sliding into November with a quickness. You'll be able to purchase any Pixel 4 on a 24-month installment plan, buy a Preferred Care package covering 2 years of accidental damage and an additional year of mechanical breakdowns beyond the warranty at an upfront cost of $149, and trade in your current phone for up to $400 in credits — however, you'll only get up to $295 for a pristine Pixel 3 XL, meaning that expensive iPhone owners are going to be better off here.

All U.S. Pixel 4 pre-order customers will receive $100 to spend on anything at the Google Store (not just accessories as site text might suggest) if they reserve by October 26. The store is also giving current Google One subscribers — at least those who would be a Google One subscriber 30 days after their item has shipped — 10% of the cost of their order back in credits as well. There's a lot of rebating going on to help Google seal the deal. 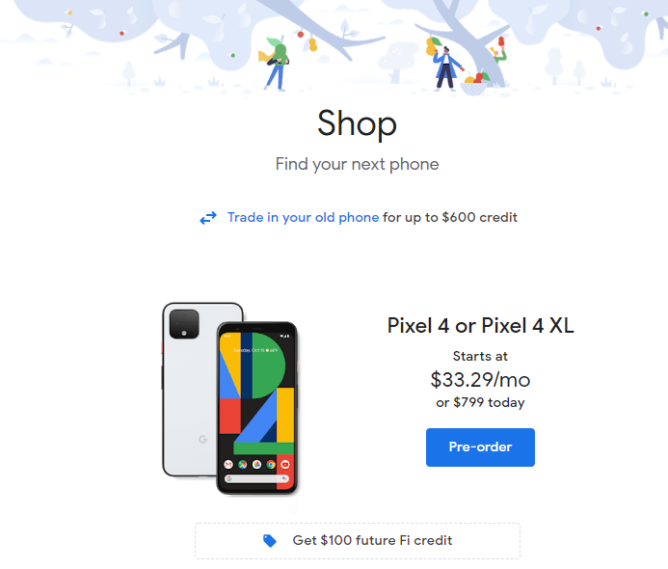 If you're with Google's MVNO, the situation is degrading a bit slower. As the customer pool is more limited, stock is not being reserved as quickly as other outlets. You may still get a delivery within October yet.

Google Fi is offering pre-order customers $100 of service credit that can be redeemed after 30 days of activating your new device. Again, you just have to reserve by October 26. You also have 24-month payment plans available here and a higher trade-in ceiling of $600. Device Protection costs $8 per month for either Pixel 4 or 4 XL — this gets you access to subsidized, same-day screen repairs at uBreakiFix locations (price TBD) and $79 or $99 device replacements, respectively.

The self-proclaimed Un-carrier has announced that it will begin pre-orders for the sparkly new Pixels at 9 p.m. PDT tonight with first shipments out by October 24. The phones support T-Mo's 600MHz spectrum.

If you're switching to T-Mobile with an older Pixel phone in good and working condition, great news: you'll get $800 of credit over 24 months. That covers the whole cost of a 64GB Pixel 4 and leaves just $200 balance on a 128GB XL. If you're already with the network or don't have a Pixel, you can get up to $300 off with an eligible trade-in.

From October 24 through 26, the company is holding astronomy events at its Signature Stores in Chicago, Las Vegas, Miami, New York (Meatpacking District), San Francisco, and Santa Monica, California, to promote the Pixels' new astrophotography capabilities. "Night Sight kits" will be given away featuring a Pixel-brand tripod, a Bluetooth shutter trigger, and an astronomy guide. Stores will begin their events at 5 p.m. local time for the first two days and at noon on the last day. Google is also hosting a block party in front of T-Mobile's Time Square store on those dates starting from 10 a.m. 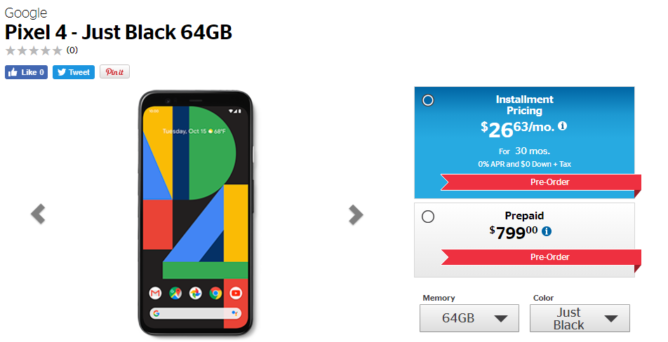 For this super-regional carrier, pre-orders are happening right now in stores and online with sales officially on from October 24. You can sign up for a 30-month installment plan.

Big Red also has pre-orders up with shipments on October 24. You can purchase either phone on a 24-month installment plan.

If you buy one, why not get one, too? The carrier is offering $800 second-Pixel credit to new customers, switchers, or existing customers who start new Unlimited service. Switchers can also grab a $200 prepaid MasterCard just by signing up their Pixel 4 on the installment plan. And you can trade in your current device for up to $450 in credit. Verizon Business customers on $24.99 plans or higher can also take part in these promotions.

You'll have to wait until sometime tomorrow, October 16, to lodge your order with Ma Bell. Still, the same ship day applies: October 24.

The network is offering up to $700 towards a new Pixel if you sign up for the 30-month installment plan and trade in an eligible device. If you're adding a new line or upgrading an existing one, you can get $300 more. You may thus be able to cover the entire cost of a 128GB Pixel 4 XL. 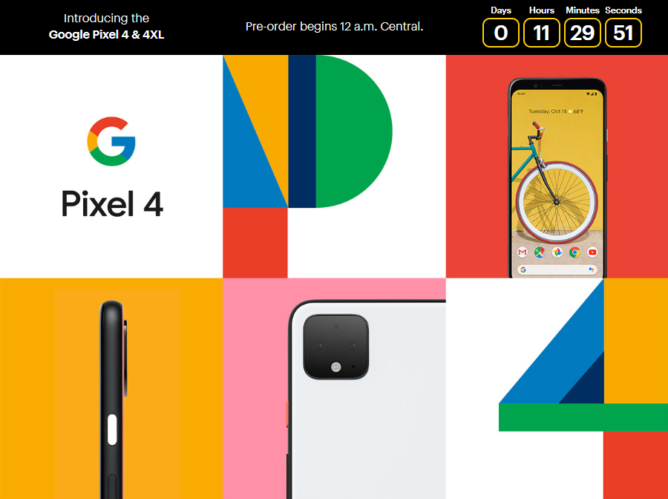 Ah, we get to the network that does leases instead of straight-up pay-to-own plans. You'll be able to pre-order a phone at 10 p.m. PDT tonight and have it shipped to you on October 24.

While the leases are termed at 18 months, the monthly payments are actually 1/24th of the full retail price. If you wish to buy out your phones, you'll need to notify Sprint and pay one-quarter the MSRP within 6 months of lapsing your lease. This applies to phones on free leases, too, meaning that you'd only be paying $200 to own a 64GB Pixel 4 — it's not a bad deal, but it's complicated.

As we learn of more carriers' plans to sell the Pixel 4, we'll update this post. 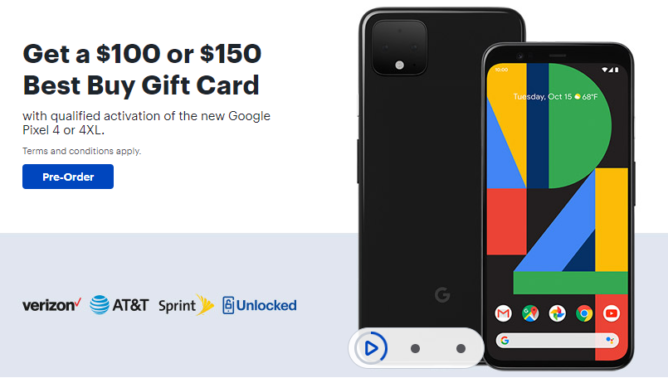 If you prefer to go through the big box store to buy your Pixel 4, you can grab a $100 in-store gift card for an unlocked device or a $150 card if you link your device with AT&T, Sprint, or Verizon. In addition, you can also take $50 off the list price with by activating your unlocked device on AT&T or Verizon, and $100 off with Sprint.

B&H is also giving out $100 gift cards with pre-orders and so is Amazon.

While separate entities, Comcast and Charter have run their Verizon-based MVNOs in similar ways. Both of them are available for pre-order now with first ship dates in line with the rest of the carriers, save for some depleted stock pushing back some deliveries.

The one leg that Spectrum Mobile has up on Xfinity is a bonus credit of $200 to whatever trade-in device you bring over.

Verizon's own sub-carrier targeting millennials has gestured towards selling the phone. It also expects to offer switchers the same $200 prepaid Mastercard balance it has offered to other switchers who have bought phones valued above $400. Until it makes an announcement, though, the company is only able to take in unlocked units.

[Update: More retailers] The Lenovo Smart Clock is already $60 ($20 off) from Walmart