Now, you may be asking yourself, is the game any fun, and to that, I can say it passes the time, but that's about it. I wouldn't go so far to say that I enjoyed the game, but that's because it's barely a game. The majority of your time will be spent in the title's menus as you shuffle from screen to screen, dealing with your notifications and upgrades. I find this rather annoying, and it makes the game feel like work, which is the exact opposite reason I choose to game.

More or less, you'll collect and build a team made up of the cast of the films, and of course, you'll have to upgrade their gear constantly. So not only does the game's loot boxes contain heroes to collect, but they also contain equipment and powerups, so you can expect an assault on your wallet from three fronts. Once you send your characters on missions is where the real meat of the gameplay is to be found, but all you'll do is tap on the screen to upgrade your heroes and to take down zombies. This mechanic falls flat rather quickly, though you can let the game idle, and it will play itself.

I suppose Zombieland: Double Tapper doesn't differ much from the many F2P idle games on the Play Store, though I can't say I'm a fan of any release that contains in-app purchases that range up to $99.99 per item, especially when they are shoved into a title that serves double-duty as an advertisement. It's also worth noting that there are two separate types of in-game currency in the game, where one is difficult to obtain while playing for free. I also don't enjoy the fact that there are three separate types of loot boxes (which can be obtained with one of the currencies that you can purchase outright in the store), or that you have to continually collect and upgrade heroes to advance, thus pushing players towards the ever-present loot boxes even more. 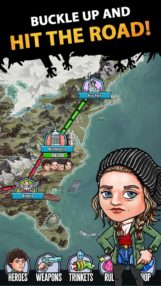 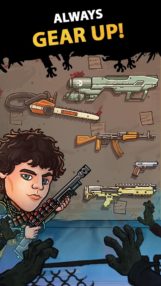 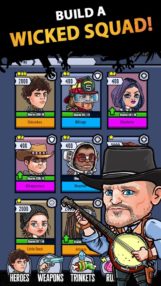 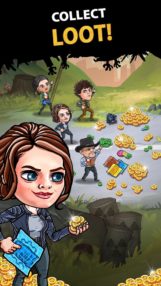 Zombieland: Double Tapper definitely has the advantage of name recognition, but really this is a game that plays just like all the rest. It's easy to tell it was built from the ground up to push players towards its monetization, and the lack of skill-based gameplay makes for a title best played when looking to waste short amounts of time. Endlessly tapping on the screen does not a game make, and with the constant assault of notifications that take you out of the gameplay, this is a difficult title to spend large amounts of time with. Sure, if you enjoy these mechanics, then you'll probably have fun with this release, but for those that are looking for a challenge, you'll have to look elsewhere. Zombieland: Double Tapper is a casual game through and through, and in my opinion, it's one worth skipping. In Zombieland: Double Tapper, players embark on a wacky road trip across the post-apocalyptic wastelands of America that have been overrun by the undead. Play as favorites Tallahassee, Columbus, Wichita and Little Rock, as well as characters from the new film. Zombieland: Double Tapper also introduces several original heroes exclusive to the game for players to collect, customize and upgrade.

“Zombieland: Double Tapper finally brings the film’s unique blend of humor and action to mobile devices,” said Paul Joffe, Vice President, Sony Pictures Television Games. “With loads of characters, weapons, and items to collect and combine, players will have hours of fun creating new ways to kill zombies as they travel across America.”

Zombieland: Double Tapper lets players slay zombies in dozens of missions in a cross-country road trip from the woods of New England to the beaches of California. Players will have no excuse not to “nut up or shut up” when armed with this arsenal of unique weapons that offer fun and creative ways to dismantle hordes of zombies or when facing off against towering zombie bosses.

“Co-developing a title tied to a popular franchise like Zombieland showcases our commitment to creating authentic experiences on the mobile platform,” said Samir El-Agili, President of Tilting Point. “We are excited for fans to see the results of our collaboration, and will continue to leverage our expertise and deep knowledge of free-to-play mobile games to ensure players are getting the best Zombieland experience.”

“It has been a wonderful experience bringing Zombieland: Double Tapper to life,” said Daniel Nay, Co-Founder and CEO of Metagame Studio. “Combining idle RPG mechanics with a deep upgrade system has allowed us to create a game that is fun to play but challenging to master.”

Zombieland: Double Tapper is now available as a free download on iOS and Android stores. To download press assets, including the new launch trailer, visit: https://tinyurl.com/y583zc2l

For all the latest information on Zombieland: Double Tapper, visit Zombielandgame.com.

A decade after Zombieland became a hit film and a cult classic, the lead cast (Woody Harrelson, Jesse Eisenberg, Abigail Breslin, and Emma Stone) have reunited with director Ruben Fleischer (Venom) and the original writers Rhett Reese & Paul Wernick (Deadpool) for Zombieland: Double Tap. In the sequel, written by Rhett Reese & Paul Wernick and Dave Callaham, through comic mayhem that stretches from the White House and through the heartland, these four slayers must face off against the many new kinds of zombies that have evolved since the first movie, as well as some new human survivors. But most of all, they have to face the growing pains of their own snarky, makeshift family.

Sony Pictures Television Games is an award-winning, world-class mobile games publisher that is recognized for its premier brands including: Jeopardy!, Wheel of Fortune, and Hotel Transylvania. Most recent games include the Emmy®-nominated Jeopardy! Skill on Amazon Alexa, Who Wants to be a Millionaire Mobile, and Smurfs Bubble Story.

Tilting Point is a new-generation games partner that applies a unique progressive model to free-to-play games publishing. Tilting Point takes live games with the highest potential and scales them up to top rankings by leveraging its $132 million user acquisition fund, market leading UA/LTV technology and expert teams who understand the market and the players exceptionally well. Once a game scales, the pathway to bigger projects, such as co-development, is open. Tilting Point has scaled over 65 games across the US, Europe and Asia and is currently scaling 26 games and partnering on 4 co-development projects. www.tiltingpoint.com

Pixel 4 pre-orders come with $100 Google Store credit in the US, other freebies elsewhere