Every phone leaks, but Google had a hand in leaking the Pixels this year. So, this won't come as a surprise, but the Pixel 4 and 4 XL are official. They look just as we expected based on all those leaks: there's no notch, but the sizeable bezel is packed with sensors including IR face unlock cameras and a Soli radar module. These are Pixels, so you can also expect the best of Google's software experience, too.

Google is pushing Soli radar capabilities on the Pixel 4, but we already knew most of the specifics from Google's own blog posts. You can wave at the phone to skip music tracks or silence an alarm, but Soli can also detect when you're reaching for the phone. That wakes up face unlock sensors and lowers the volume of your alarm. Google says the phone can also tell the difference between intentional gestures and accidental nearby swipes. All the Soli data is kept on device, too.

The Pixel 4 also has an exclusive new Assistant experience. The UI looks a bit different, and the phone does more processing locally. So, setting a timer happens entirely on-device, but it reaches out to the cloud to get data like flight info. Your face unlock data won't leave the device at all, and it's secured locally with the Titan M chip. Supposedly, the Pixel 4's face unlock is the fastest on the market. The Pixel's new recorder app lets you search through audio transcriptions, and that happens all on the device, too. 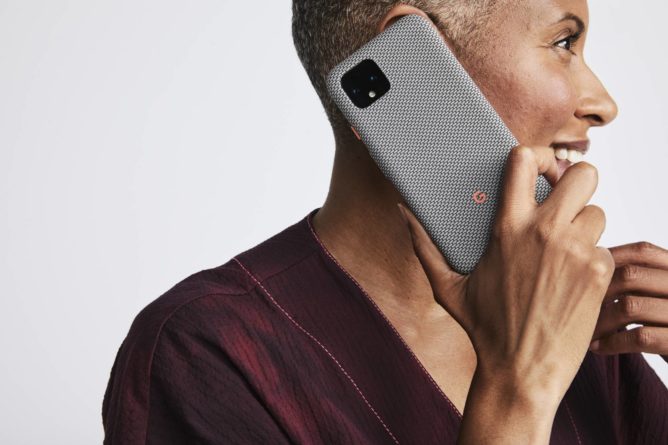 Google says DisplayMate has granted the Pixel 4 XL an A+ rating, the same as many recent Samsung phones. The previously announced Smooth Display feature peaks at 90Hz like the OnePlus 7 and 7T series. However, Google's screen dynamically adjusts between 60 and 90Hz. We not sure how aggressive it will be, though.

This is the first Pixel phone with a second rear camera sensor. So, you get a 12MP standard shooter and a 16MP camera with 2x optical zoom. These cameras work in concert with Google's fancy machine learning to make photos sharper at various zoom levels. In fact, Google notes that you get better photos by using digital zoom in the camera app to compose your shot as opposed to cropping after the fact. Machine learning has also extended HDR+ to the viewfinder, so you'll have a better idea how your photo will look.

If you want Google's latest and (we hope) greatest, pre-orders are live today. The smaller Pixel 4 will run you $799 with 64GB of storage. The 64GB Pixel 4 XL will cost $899. You also get three months of Google One if you're a new subscriber. Shipping starts on October 24th, and it'll be available on all carriers in the US.

Outside the US, the Pixel 4 will be available in Australia, Canada, France, Germany, Ireland, Italy, Japan, Singapore, Spain, Taiwan, and the United Kingdom.