Today's Made by Google event has been packed with new mobile and smart-home hardware, but for all the cutting-edge functionality and smart features these devices aim to offer, they're not much use for anyone without data connectivity. Three years ago, Google set out to help users shower their homes with high-speed, ubiquitous Wi-Fi with the launch of the mesh-capable Google Wifi. Now that hardware's finally getting an overdue refresh with new features, a new look, and a new name: Nest Wifi.

Just like the first time around, Nest Wifi lets users combine multiple units to improve coverage. That involves one base router, and your choice of two or three remote points. The router itself gets a bit of a facelift with a new, more contoured design intended to enhance aesthetics and encourage users to leave it out in the open, optimizing signal strength — Google claims we can expect to see double the speed, and 25% improved coverage. 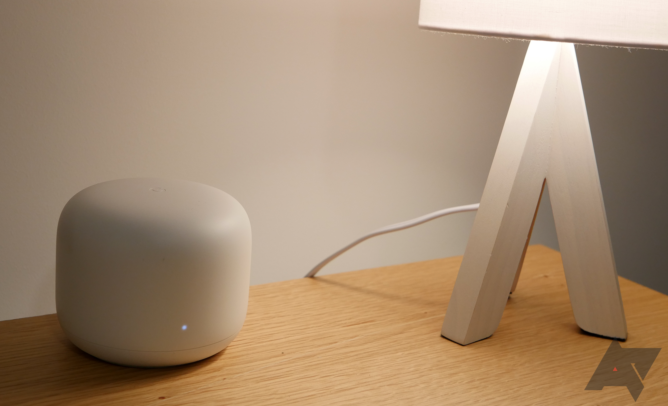 That's paired with a Nest Wifi point. For this second-generation hardware, Google's upgrading these points to now function as what are essentially Home Minis, with integrated speakers and support for the full range of Assistant voice commands.

With the Nest Wifi router and just one remote point, Google's data suggests that up to 85% of homes should see full wireless coverage. If your house is a little larger, you can always augment that with a second point.

Software also gets a refresh, with the same sort of easy setup that promises users will be able to get online without needing to tweak a lot of overly technical settings. In addition to getting your regular Wifi devices connected, the Nest Wifi is designed to streamline smart-home setup, supporting BLE and Thread (coming soon) standards, and popular platforms like Philips Hue.

Pre-orders of the Nest Wifi open today, with availability getting underway on November 4. For a two-pack, consisting of one router and one point, you'll pay $269 — stepping up to the three-pack, with two remote points, will run $349. The router itself will be available in white, with points in your choice of white, pink, or blue (formally Snow, Sand and Mist).

Have a particularly cozy apartment? Even that Nest Wifi two-pack sounding like overkill? Google has confirmed with us that its new router will indeed be available just by itself, without any bundled points. Pricing for the router by itself will come to $169, or $149 for additional points.

We've also learned a few additional details about the Nest Wifi hardware, like it featuring 4x4 MIMO connectivity, supporting Wifi 5 (alas, no Wifi 6 just yet), and utilizing a 5GHz wireless backhaul for communication with its points.

The Google Nest Wifi system will be available in Australia, Canada, France, Germany, Japan, Singapore, the United Kingdom, and the United States (except Puerto Rico).