Security breaches and phishing attacks are still distressingly common these days, so many of us secure accounts through two-factor authentication (2FA) systems based on SMS or Google Prompt. That's better than nothing, but 2FA codes might not be enough for high-risk individuals. Physical 2FA devices add another layer of security, and Google made available to the general public last year its Titan Security Key Bundle. Initially released with USB-A, NFC, and Bluetooth support, the 2019 edition of Titan has now been updated to support USB-C natively.

Security keys like the Titan authenticate your account in place of a one-time code, but we were lukewarm on Google's hardware when we reviewed it last year. It cost more than similar products, Bluetooth and NFC setup were finicky, and it lacked support for FIDO2 (at the time). Having no native USB-C was also annoying because that meant using a USB-A to USB-C dongle on many Google devices. Although we haven't gotten our hands on the new Titan key, the setup process should be simpler this time around as it only works through USB-C out of the box. The new Titan is probably a re-skinned version of the YubiKey 5C, so its security looks solid with support for U2F and FIDO2, a passwordless evolution of FIDO U2F. 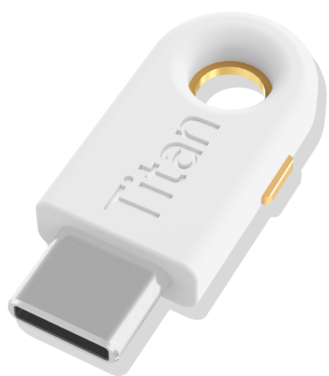 The 2019 Titan security key will start to go on sale tomorrow on October 15th, 2019 for $40 at the Google Store in the United States. Older models of the Titan will continue to be offered, either as a bundle or sold individually.

The USB-C Titan Security key is now available on the Google Store in the US.

Zombieland: Double Tapper is a F2P idle game that serves double-duty as an advertisement