As the rumor mill grinds, so has Google when it came to developing another pair of Pixel Buds. The first one, which debuted in 2017, were pretty much plastic central and, while using Bluetooth, still cabled. This time around, the cable's gone, the buds are thick, and Google Assistant is easier to access than ever.

Google is placing heavy emphasis on ambient computing and craftsmanship. The new Pixel Buds are examples of just that: far-field microphones on each bud are able to pick up your voice just like a Google Home smart speaker so you can call up Google Assistant without having to touch your phone; those mics get fit in with custom-designed battery and speaker in each bud.

Importantly, Google pointed out the quality of the seal when users put in a tip into their ears and how well they've balanced the input of ambient sound with spatial wells carved into the bud canals. More of that ambient computing allows the buds to adapt their volume to the environment, though you can also ask Google Assistant to raise or lower the sound for you.

The new buds run on a 5-hour cycle and with the included charging case, they can go for 19 hours more. As they work on Bluetooth, they're able to operate pretty far from a master device — Google hardware chief Rick Osterloh touts they can work from three rooms away indoors or 360 feet (a football field) outdoors. 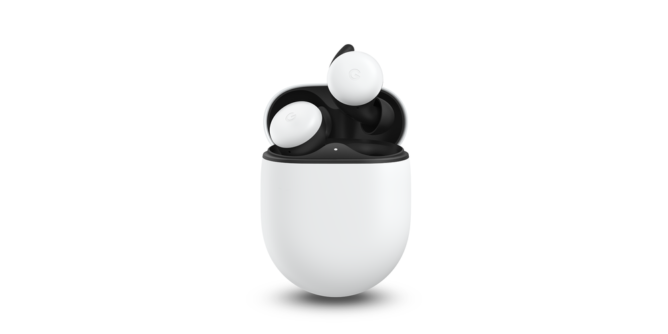 More details are to come as this product won't go for sale until next spring. We do have a price, though: $179. And they'll be available in four colors: Oh So Orange, Quite Mint, Clearly White, and Almost Black.