Many apps are rushing to add a dark mode now that Android 10 and iOS 13 have implemented it on the system level. Some apps, however, have had a dark theme for years and the only thing they need to change is to make it respect the system setting. That's the case for Pocket Casts, the popular podcast player.

With the latest beta v7.5.3, Pocket Casts has added a new toggle to let you decide whether the app's theme follows Android's dark mode setting. It's on by default, so the app will jump between light and dark, depending on what your system is set to. This works on Android 10, obviously, and should also be compatible with Samsung's Night mode on Android 9, and possibly other devices too. 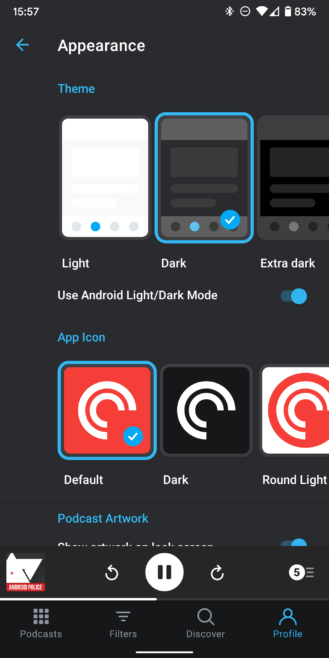 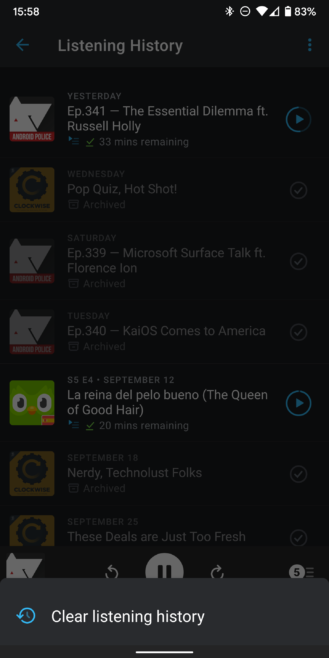 The beta also includes a few other changes. You can now clear your listening history, just in case you're ashamed of how much you like listening to the Android Police podcast. Supposedly, multi-selection is now possible when manually adding audio files to the app, but I couldn't get that to work on my Pixel 2 XL. I tap-and-hold to select one file, the interface seems like it's ready to accept more selections, but tapping anything else doesn't do anything. Since it's a beta, it's likely that this will be fixed before it's released to all users.

WHAT'S NEW
- Dark Mode support! You asked for it, we delivered! Android 10 users rejoice, Android 9 users don't lose hope a lot of Samsung and other phones support this too. Android 5 users I don't know what to tell you except you do you. Stay strong.
- Added multi select for Files
- Added a clear listening history button (you know, for the times you totally played it for the articles but your mum is still mad)
- Multitudes of small and big fixes

Pocket Casts is now free for anyone to download and use on Android, so you can grab the app and give it a go from the link below. If you want to test these recent beta features, you need to join the program on the Play Store.

Version 7.5.3 of Pocket Casts, with all the changes detailed above, is now released in stable. Multiple file selection still doesn't work for me though.