We're just one day away from Google's big hardware event, but the company's leaky ship has ensured pretty much every detail about the Pixel 4 and 4 XL is common knowledge by this point. Further images, videos, and possible pricing trickled out over the weekend, so we may as well round them up even if there's not an awful lot of new information.

According to Best Buy pricing data obtained by 9to5Google, the 64GB Pixel 4 XL (on Verizon and Sprint) will cost $999. That represents a $100 price hike compared with the same Pixel 3 XL model, and the same price as the 128GB variant of the last-generation phone. We can't be 100% certain of this pricing yet, but if true, the increase is likely to anger plenty of potential customers. The same report suggests that the updated Nest Mini speaker will be priced at $49.99, just as before. If the original Google Home Mini is anything to go by, it will frequently be on sale for much less than that. 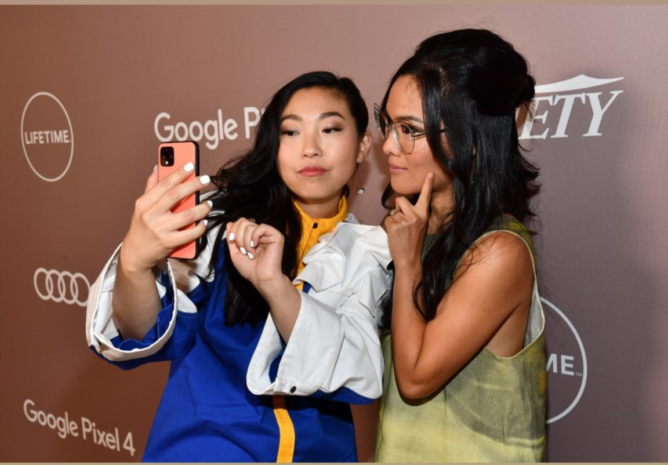 Awkwafina, Ali Wong, and Pixel 4 at a Google-sponsored event.

Since the Pixel 4 is probably the most leaked phone of all time, it doesn't really matter that it's been seen in the wild a couple of times recently. Linus Sebastian, better known as Linus Tech Tips, was spotted by an eagle-eyed Redditor using the Pixel 4 in an episode of The WAN Show. Even more openly, actor and rapper Awkwafina was photographed using the Oh So Orange Pixel 4 to take a selfie of herself and comedian Ali Wong at a Variety event that was actually sponsored by Google, so we can assume this was a pre-planned outing designed to stoke the publicity fires some more. In another example that's clearly no mistake, T-Mobile CEO John Legere uploaded a photo of himself to Instagram with two white Pixel 4 retail boxes, below.

Thankenstein 🧟‍♂️here to tell you that 🍞bread🍞 pudding is INN!! Head over to my fb to see how it’s made! Anyone notice any interesting props during the show? 😏 #SlowCookerSunday #CEOlife #Google #TMobile #NationalDessertDay

Reddit user u/PlayDohBear used a Pixel 4 XL for a few hours and shared their thoughts. While they praised the 90Hz refresh rate of the screen, they did say there was still some noticeable stutter in the OS — we can only hope that's a problem with pre-release software that will be ironed out once the phone reaches the hands of consumers. Other observations include that Motion Sense is gimmicky but "works flawlessly," setting up face unlock was a little fiddly but is ultimately faster to unlock than on an iPhone, and the speakers sound better than those on the Pixel 3 despite not being front-facing. Read the full post to find out what else they had to say. Later, the below video (original link) of Motion Sense being used to skip Spotify tracks was also shared by the same user.

We'd already heard that the Pixel 4 might not include earbuds in the box, and that appears to be confirmed by leaked packaging that has also been shared on Reddit, as well as the absence of a USB-C to 3.5mm adapter. The phone, an 18W charger, a charging cable, and a quick switch adapter is all you'll get if you fork out for the Pixel 4. It's worth noting that this is the Canadian retail version, so it may not be the same in every market. Last but not least, Evan Blass shared some more marketing images and press renders for the Pixel 4 on Twitter (including the main image on this post), just in case anyone doesn't already know what the thing looks like. 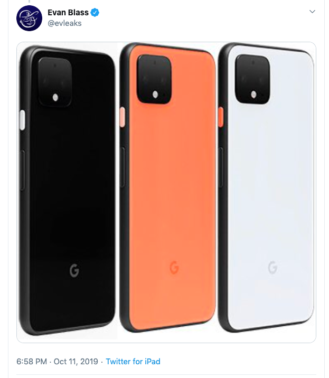 The Made by Google event kicks off at 10:00 ET tomorrow, so check it out if you want to be presented with a ton of information you already know but in a slightly more professional manner.

And another! These are the Pixel 4 fabric cases

Young pretender to the top leaker throne Ishan Agarwal has just tweeted some shots of the Pixel 4s fabric cases. They don't look quite as nice as previous versions, if you ask me, but Ryne digs the "coarser contrasty weave."

Seems like these have not leaked yet so here's the render of the Official Google Pixel 4 / 4XL Fabric Cases that I could get my hands on. The colours are Black, Blue and Grey but more could launch. #pixel4 #madebygoogle pic.twitter.com/QeSw9f8rgN

Monday deals: Get a Google Nest Hub for $58, plus $50 off Eufy Video Doorbell and more

Photos of Nest Mini leak ahead of announcement, basically just a Home Mini with a hole in the bottom