After a couple of rounds of teasing and delays, Samsung has officially announced the beta release of its Android 10-based One UI 2.0, starting today. It apparently went live in South Korea over the weekend, and today’s development marks its availability outside Samsung’s home country. Only the Galaxy S10e, S10, and the S10+ are eligible for this program while the Galaxy S10 5G is slated to be enrolled separately.

The first iteration of One UI brought a host of substantial UI changes to Samsung’s Android skin, and this second version aims to build on them for a more refined experience. As highlighted in the press note, Samsung has scaled down notification cards and the volume bar when using the phone in full screen. One UI’s Night mode has been renamed to Dark Mode, which now adjusts the wallpaper’s color temperature, while the Smart Lock screen feature darkens the text on a light background for better visibility. This update brings a cleaner interface for Device care, making it easier to check up on your phone's health and storage. You also get all the improvements Google has introduced to Digital Wellbeing with Android 10. SamMobile just shared a pile of screenshots of the One UI 2.0 beta update running on their Galaxy S10+ unit showing a whole lot of cool stuff. For starters, Samsung has incorporated Android 10’s navigation gestures alongside its own, while the camera app also appears to have undergone a major redesign. Some peripheral camera modes have been moved under the ‘More’ section at the end of the carousel menu, and the app also makes it easier to pick zoom levels. Other minor enhancements, like cutting down of excess animations and the introduction of a screen recorder, can also be spotted across the board. The entire changelog of this update surfaced last week which shares some more granular information. One UI 2.0 beta screenshots from SamMobile

Samsung has made it easier to participate in this beta program for Android 10-based One UI 2.0. You will need the Samsung Members app, which you may find already installed on many Samsung phones, though it's available at the Play Store and APK Mirror if you need it. Some have reported that the Samsung Plus app (pre-installed on older phones) may also work. 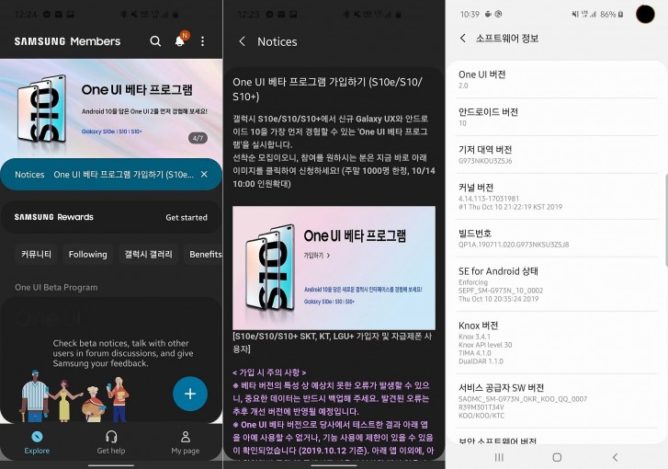 Image showing part of the beta opt-in process (in Korean, sorry). Via SamMobile.

From an eligible handset, sign in via the app with your Samsung account. If it's able to opt in, you should see a "Notices" banner that says something like “One UI Beta Program Registration.” Tap that to register your account for beta testing — though do note that the option may not appear in all markets yet. A software update with Android 10 beta should soon hit your device, which you can download and install as usual. You might want to be quick with this registration since the spots are limited and will fill up rather quickly.

As you’d expect, the Android 10 beta went live for the Galaxy S10-series users in South Korea before being announced for other markets today. A separate SamMobile story confirms the update’s German availability while its US rollout hasn't commenced yet. We'll let you know when it arrives in the US and other key markets.

For at least one of our commenters, as well as a couple folks on Reddit, the beta is now rolling out to those that were able to register for it here in the US.

Again, note that you must have opted in for the beta via Samsung's app (as described above) to receive it. If you're still mashing register to no avail or the app refuses to load, you're out of luck until it's successful. Given the load that Samsung's servers are surely under right now, you may be in for a wait.